Obama: ‘It’s time for the games to stop’ 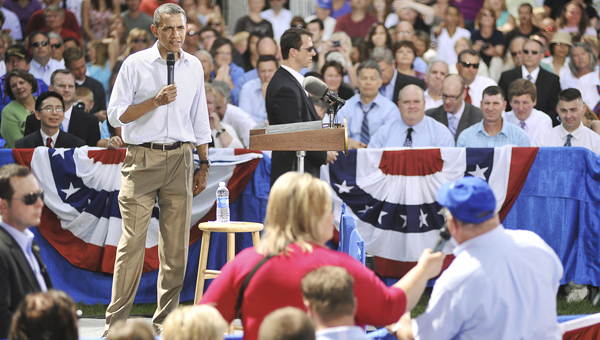 CANNON FALLS — Kicking off a three-day bus tour to the Midwest, President Barack Obama on Monday challenged Congress to be willing to compromise and put America first over their political parties.

During what was a town-hall style meeting in the city’s Lower Hannah Bend Park, Obama said he expects political representatives to show the same amount of responsibility that most Americans show when making budget and other family decisions.

“You’ve got to send a message to Washington that it’s time for the games to stop, it’s time to put country first,” Obama said. 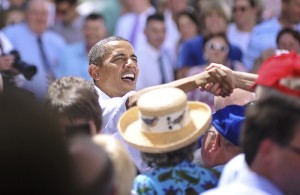 Though he stated it’s not election season yet, the president also took the chance to launch a rare direct attack Monday on the GOP presidential field, criticizing Republican hopefuls for what he contended was their blanket opposition to any compromise involving new taxes.

“Think about that. I mean, that’s just not common sense,” he said. “You need to take a balanced approach.”

His comment underscored that election season is well under way. And the bus tour itself, although an official White House event rather than a campaign swing, took on a campaign feel coming on the heels of Republican Michele Bachmann’s weekend victory in the Iowa Straw Poll and through states Obama won in 2008 but where he now needs to shore up his standing and counter GOP attacks.

Eager to get out of Washington, Obama struck a casual tone, ditching his suit and tie for a white button-up shirt and khakis for the open-air event. People attending the town-hall meeting were seated at bleachers and tables covered with tablecloths. A large American flag hung to one side of the stage. 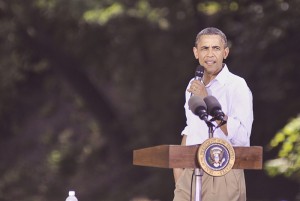 The meeting came after the president spent much of the summer holed up in the nation’s capital enmeshed in bitterly partisan negotiations on the debt crisis that cratered his approval ratings and those of Congress amid a faltering economy and high unemployment.

He acknowledged that people have been feeling anxious and distressed during recent weeks, especially considering the ups and downs of the stock market, but he expressed a sentiment of hope to those in the crowd.

“There is nothing that we’re facing that we can’t solve with some spirit of America first … choosing country over party,” Obama said, noting there is no shortage of ideas to put people back to work and improve the economy.

He encouraged Congress to renew the payroll tax cut to workers implemented earlier in his administration, to implement tax credits to companies hiring veterans, to get more products made in America into other countries and to work on patent reform.

He said the key to fixing the country’s deficit problem is not to cut more out of programs; instead, it’s “to get a long-term plan for fiscal stability.”

“It’s not that complicated, but it does require everybody being willing to make some compromises,” he said. “Some think compromise has become a dirty wird, but it hasn’t.”

After a brief address to the crowd, Obama spent a majority of the time answering questions from audience members.

One youngster at Obama’s forum tried to pin him down on the reason for the visit.

Obama left her guessing by answering with a quip. “I had heard that Cannon Falls has some of the smartest, best-looking kids around. You have confirmed the rumor,” the president said.

Charlotte Olson, former Albert Lea resident and daughter of Kyle and Rosemary Olson, said she waited in line for eight hours Sunday to get a ticket to the event.

She was one of the last people to get a ticket before the cutoff.

As a teacher to who she described as “inner-city kids,” she said one of her proudest moments was sitting and watching Obama be inaugurated as president with her students.

“I thought it was nice he picked a small town and that real people got to come,” Olson said. “I’m grateful to be here and excited to feel the energy.”

She noted she thought the president’s comments were well-rounded and noted that she admired Obama addressing that some of the Democratic members of Congress also have problems.

— The Associated Press contributed to this story.
View a gallery of Obama’s visit.