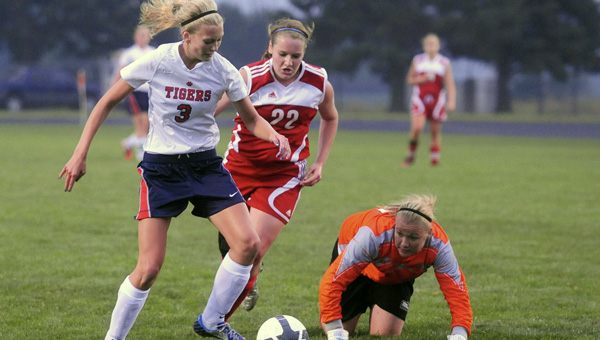 Albert Lea’s Gretta Johnson (3) dribbles the ball passed Austin’s goalie, Abby Gallaher, in the first half Tuesday to score the team’s first goal of a 3-0 win over Austin at Hammer Field. -- Andrew Dyrdal

Gretta Johnson, Kelly Nelson and Sarah Savelkoul scored goals for the Tigers who outshot the Packers 41-16.

Tigers coach Rick Barnhill said he’s pleased with the team’s start to the season but is concerned about the lack of goal scoring. The Tigers scored on seven percent of its shot against Austin and five percent Friday against Waseca.

“That’s the story I’m seeing happening,” Barnhill said. “Nothing is going to come easy for this team. We don’t have many 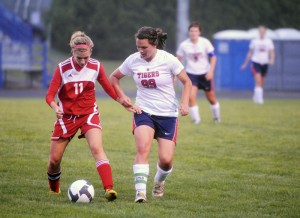 rockstar goal scorers so we’ll have to get scoring done my committee.”

The Tigers scored its first goal seven minutes and 19 seconds into the first half. Junior forward Katie Williamson passed the ball to Johnson when Austin’s goalie, Abby Gallaher, attempted to make a save just inside the box. Johnson’s dribbled the ball past Gallaher and scored an uncontested goal from point-blank range.

The Tigers’ second goal came minutes later when senior Nelson scored at 13:20. Nelson shot the ball from about 30 yards out and scored just above the fingertips of a jumping Gallaher.

The Tigers finished with 20 shots on goal in the first half and held possession for 25:41.

The Tigers third goal came at 71:13 from Savelkoul off an assist from Becca Dup. 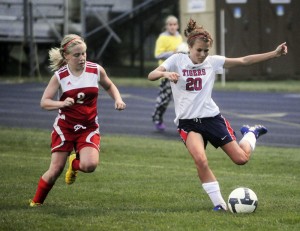 Albert Lea forward Larissa Hacker takes a shot on goal Tuesday during the first half of a 3-0 win over Austin. -- Andrew Dyrdal

forwards. He said the team needs to working on finishing everyday in practice.

“I’m pleased overall to come out with a 2-1-1 start,” Barnhill said. “Hopefully we can progress with our finishing ability and who know what’s possible for this group.”

The Tigers play again on Sept. 6 against Worthington at Hammer Field.