Oscar Jensen, 97, went to be with the Lord Aug. 6, 2011. Visitation will be held 4 to 7 p.m. Thursday at Bonnerup Funeral Service and one hour prior to the service at Clarks Grove Baptist Church. Funeral services will be at 2 p.m. Friday at First Baptist Church in Clarks Grove.

Oscar was born May 12, 1914, on a farm in Bancroft Township in Freeborn County. Oscar was the son of Iner and Marie Jensen. When he was 5 years old his family moved to Denmark and returned to the United States when he was 9 years old. 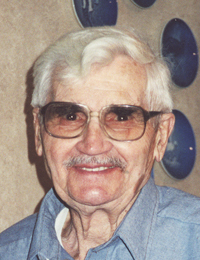 Oscar met Berneice (Fredrickson) at the Clarks Grove Creamery where Oscar worked. They were united in marriage at Clarks Grove Baptist Church on Dec. 31, 1939.

While growing up, Oscar farmed with his dad and then went on to work at the Clarks Grove Creamery, Queens Stove, and Wilson, Inc. Oscar also did carpentry work until his retirement.

Oscar was an avid gardener and loved the Minnesota Gophers, Twins and Vikings.

He was the happiest when surrounded by his children, grandchildren and great-grandchildren.

Oscar was preceded in death by his wife, Berneice, of 67 years; his parents; his brothers: Alvin (Arlene), Egon (Alton) and Howard; sister, Mildred; and grandson, Chad.