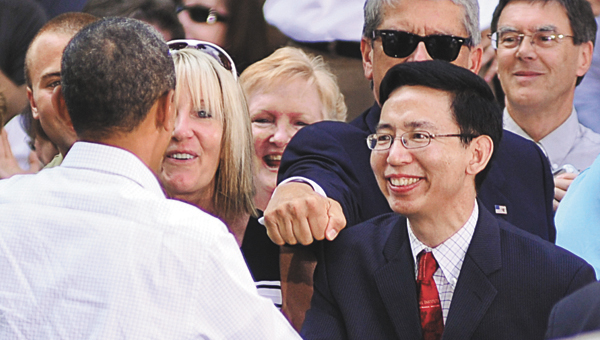 CANNON FALLS — For one area resident, President Barack Obama’s Monday visit was about more than jobs and the economy — it was about sharing a slice of history with family.

Betty Behnken of Blooming Prairie waited in line for nine hours Sunday to get tickets to see the Democratic president. Staking a spot in line at 4 a.m. was worth the wait to Behnken, though, because she wanted to share the experience with her high-school-aged grandchildren.

“I’ve never seen a president speak live before,” Behnken said. “This is marvelous.”

When Behnken was in high school, President John F. Kennedy was elected as the first Catholic president, which was a “big deal” at the time, according to Behnken. Now that Obama has made history as the first African-American president, she wanted her grandchildren to see him speak in person.

Behnken speculated Obama’s visit to Cannon Falls is an attempt to reach out to people at the grass-roots level.

“Every place, as the city grows, becomes more political,” she said. “It’s the grass roots that every candidate is trying to glean, and I think Cannon Falls is perfect for that.”

Although Obama’s Midwest bus tour is not a campaign trip, he criticized his potential 2012 rivals for their unwillingness to include new taxes in any deficit-cutting compromises.

The president spent much of his time at the podium encouraging Americans to have faith in the future of the country. America is not broken, he said, but its politics are, which is why the word compromise has become a “dirty word.”

“I think people would feel pretty confident (in America) if they thought their leaders were working together,” he said. “There is nothing we are facing that we can’t solve.”

“We’ve got so much going for us, folks would gladly trade places with us,” he added.

Obama said jobs need to be created en masse while Congress cuts $4 trillion over the next 10 years. Although he didn’t site many specific ideas for job creation, he said the government should consider selling more American cars in other countries and investing in rebuilding America’s infrastructure.

The problem isn’t a shortage of job creation ideas, Obama said, but a lack of action by Congress.

After Obama was done speaking, Behnken said she thought Obama’s words were hopeful and confident. She mentioned she had never lost confidence in America, despite the developing economic woes on Wall Street.

“It was a typical hope speech — Americans have hope for the future, and America is still great,” she said. “I really think he spoke from his heart to rural communities.”

Dennison said she was glad to see Minnesota politicians in attendance. Democratic Gov. Mark Dayton attended, as did U.S. Sens. Amy Klobuchar and Al Franken and Congressmen Tim Walz and Keith Ellison. Dennison said she is thankful for political representatives who understand the importance of The Hormel Institute’s research.

“It’s encouraging that (these lawmakers) are our collaborative partners,” Dennison said.

Both Dong and Dennison said Obama’s words were “motivating” and indicative of a bright future for America, despite the national debt crisis.

“He is one of those leaders that can cross partisan lines,” Dennison said. “He appeals to Americans in general.”

See a gallery of Obama’s visit to Cannon Falls.