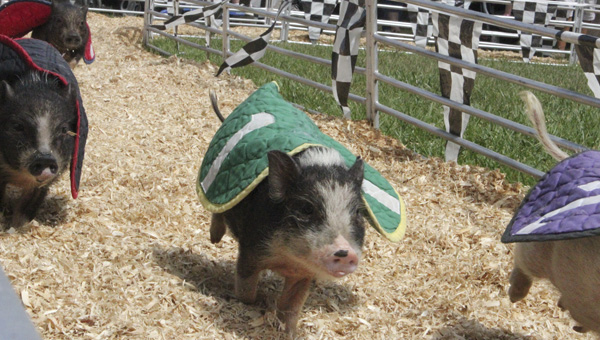 Pigs race around a track Thursday afternoon as part of the Swifty Swine Swimming & Racing Pig Show at the Freeborn County Fairgrounds. The pigs would race around the track to win an Oreo cookie. -- Sarah Stultz/Albert Lea Tribune

Squeals of glee and laughter are erupting from one new show at the Freeborn County Fair this week that’s entertaining both young and old alike. 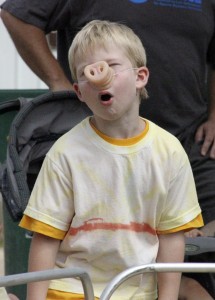 Mason Buendorf, 7, pretends to oink after buying a play pig snout before the Swifty Swine pig races Thursday at noon. Buendorf said he enjoyed the races and had never seen anything like them before. -- Sarah Stultz/Albert Lea Tribune

Set up on what’s called the Porkchop International Speedway, four small pigs are racing around a track for a chance to win not cash — but an Oreo cookie waiting for them on a silver platter.

Swinemaster Libero Kinnear, who has been conducting the Swifty Swine Swimming & Racing Pigs show for four or five years, introduces the pigs — who are given pig-related names, such as Kevin “Bacon,” Brad “Pig,” Robert “Pattinswine” and Justin “Bie-boar — and then within a few seconds, a gate is lifted and the pigs begin to sprint around the track.

With each race, Kinnear calls on support from the crowd, with one person specifically to cheer on each pig.

The person who cheered on the winning pig in each race is awarded a plastic pig snout and his or her own package of Oreo cookies.

“I really liked it,” said 13-year-old Betsy Wagner of Albert Lea, who cheered on a winning pig Wednesday. “It’s really fun for the kids, and I liked how the kids have multiple chances to win a prize.”

In between the pig races, a 7-week-old pig named Swifty jumps into a 9-foot-long tank of water and swims across. After a little coaxing, Swifty leaps off one of the sides of the tank and then quickly swims to the other side. 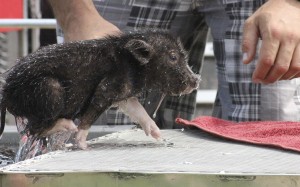 Swifty the pig climbs out of a 9-foot tank of water Thursday afternoon after his part of the show at the Freeborn County Fair.

Seven-year-old Mason Buendorf said he, too, thought the show was fun and noted that he had never seen anything like it before.

Kinnear said he’s been conducting the pig racing shows for four or five years, but has been training other animals long before that. He said he used to train sea lions and sharks in Texas.

“The pigs are by far the most fun, the smartest animals I’ve worked with yet,” he said.

Tucked away on Machinery Hill, the shows are scheduled for five times a day beginning at noon and going every two hours until the final show at 8 p.m.

Each show includes three pig races plus a swim by Swifty. 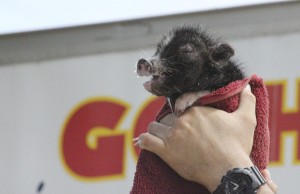 Libero Kinnear, swinemaster of the Swifty Swine Swimming and Racing Show, shows off Swifty the pig Thursday after the pig swam across a tank of water. Kinnear said Swifty was 7 weeks old.

The races include several breeds of swine, including Durocs, Hampshires, Yorkshires and pot bellies.

Kinnear said when the pigs get too big, they are given to 4-H clubs.

Information about the Swifty Swine Swimming & Racing Pigs can be found at www.swiftyswine.com.

Watch a video of the races. 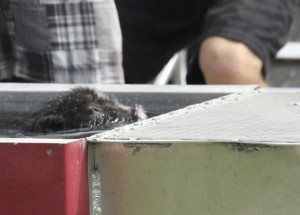 Swifty the pig reaches the end of a 9-foot tank Thursday during the Swifty Swine show at the fair. 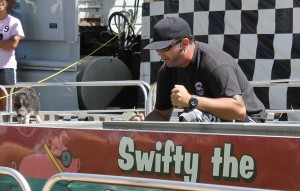 Libero Kinnear, swinemaster with Swifty Swine Productions, encourages Swifty the pig to jump into a 9-foot tank of water Wednesday and swim to the other side at the Freeborn County Fair.