Pillsbury Avenue standoff is over 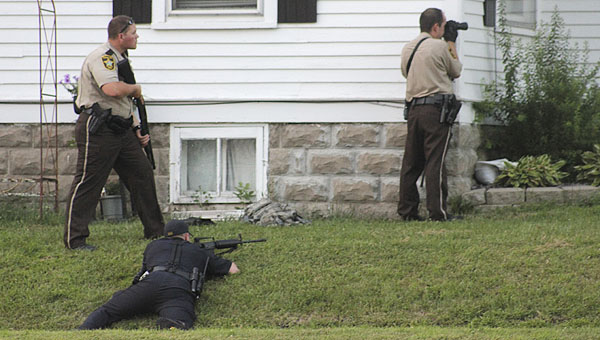 An Albert Lea police officer keeps an assault rifle aimed at the alleged gunman Sunday evening near the corner of Pillsbury Avenue and Johnson Street while a Freeborn County sheriff's deputy films the standoff and another deputy holds a rifle. -- Tim Engstrom/Albert Lea Tribune

Albert Lea Police Chief Dwaine Winkels said no shots were fired, and the man did not make any threats toward officers. 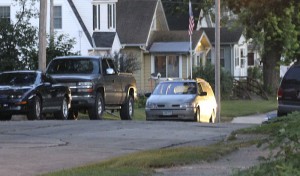 The alleged gunman hides inside his silver minivan during a police standoff Sunday evening on Pillsbury Avenue.

The man was reportedly threatening suicide and was taken to Mayo Clinic Health System in Albert Lea for a medical evaluation.

“We’re very pleased this ended peacefully,” Winkels said. “I hope we can get this man some help.”
Multiple neighbors identified the man as James Anderson, an occupant of 706 Pillsbury Ave. The van was parked in front of the house at the time of the incident.

Winkels said the standoff unfolded after dispatchers received a call from the man’s mother at about 7 p.m. The woman advised police that her son was despondent and suicidal. 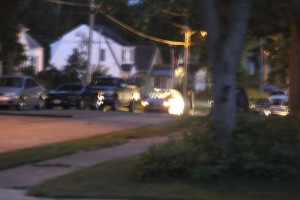 Though the image is fuzzy, the alleged gunman can be seen with his hands up just before officers subdue him Sunday evening on Pillsbury Avenue. -- Tim Engstrom/Albert Lea Tribune

When police arrived, they found Anderson in a silver van with a shotgun, and law enforcement immediately set up a perimeter about a block wide on each side on Pillsbury Avenue, the police chief said. They went door to door of nearby neighbors and advised them and other bystanders to stay indoors or back away from the scene.

The SWAT team, along with Freeborn County sheriff’s deputies, assisted at the scene.

Winkels said the SWAT team was activated as a precautionary measure, and Albert Lea police Cpl. Tim Matson talked to Anderson through an bullhorn, asking him how he was doing and if he needed anything such as water or cigarettes.

When there was some movement in the van, Anderson was advised to come out of the vehicle through the driver’s side door with his hands raised. 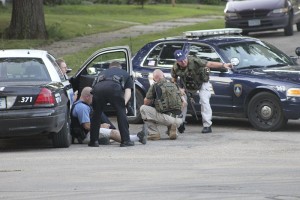 Anderson ultimately complied around 9 p.m., obeying officers’ commands. He came out with his hands up, then sprawled out on the street to let officers subdue him.

Albert Lea police officers, Freeborn County sheriff’s deputies and members of the SWAT team had assault weapons drawn for most of the standoff.

An ambulance from Mayo Clinic Health System of Albert Lea and an Albert Lea Fire Department truck were also on hand.

Albert Lea Police Lt. Jeff Strom said police have had prior contacts with the man, including one similar incident involving the SWAT team two or three years ago.

Neighbors Dave and Peggy Anderson — no relation — said this makes their neighborhood feel unsafe.
“You don’t feel very safe to have streets barricaded, a SWAT team and an ambulance…” Dave Anderson said. 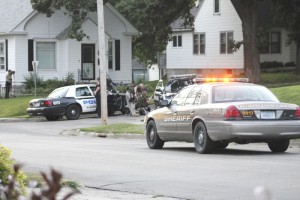 “…Police running up and down the alley, guns drawn,” Peggy Anderson added.
They said the incident disturbed the neighborhood’s tranquility.

Peggy Anderson was watching TV when she received a call asking what was going on near their house.
She went outside to see, and then her husband joined her a half hour later.

There were numerous people standing on corners of the nearby intersections, attempting to see what was taking place.

Brady Engelby was just leaving the Freeborn County Fair when he received a call from a friend who told him about the standoff. Starting at about 8 p.m., he stood near the corner of Freeborn Avenue and Johnson Street with about 30 other people and watched as the events unfolded.

“It’s definitely unusual,” Engelby said. “This doesn’t happen in our town that often.”

Some other bystanders, Italo Gomez and Tracy Bothum, said they arrived at the same corner right after the standoff began.

They questioned why authorities haven’t kept a closer eye on Anderson, considering the similar incident from a few years prior.

Below is a map of the location of the standoff:
View Larger Map