Sean Ernest Stenzel, 27, of Matawan, died Sunday, July 31, 2011, at St. Marys Hospital in Rochester as the result of a car accident. Funeral mass will be at 10:30 a.m. Thursday at St. Casimir Catholic Church in Wells. Visitation will be from 4 to 8 p.m. Wednesday at Bruss-Heitner Funeral Home in Wells, and will continue one hour prior to the service at the church on Thursday. The Rev. Eugene Stenzel will officiate and burial will take place in St. Casimir Cemetery in Wells. Bruss-Heitner Funeral Home in Wells is assisting the family with arrangements. 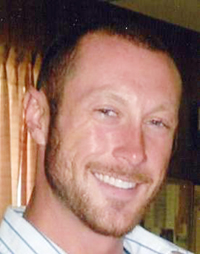 Sean was born March 13, 1984, in Winona, to DeAnne Stier and Todd Sievers. On April 12, 1984, he was adopted to Richard and Mary Stenzel of New Richland. Sean attended school at Alden-Conger Public School and graduated in 2002 from New Richland-Hartland-Ellendale-Geneva High School in New Richland. Sean worked as a carpenter and was very skilled in ceramic and floor tiling. He had a quick wit and a sense of humor. Sean had a very special relationship with all of his grandparents. He will always be remembered by his beautiful smile.