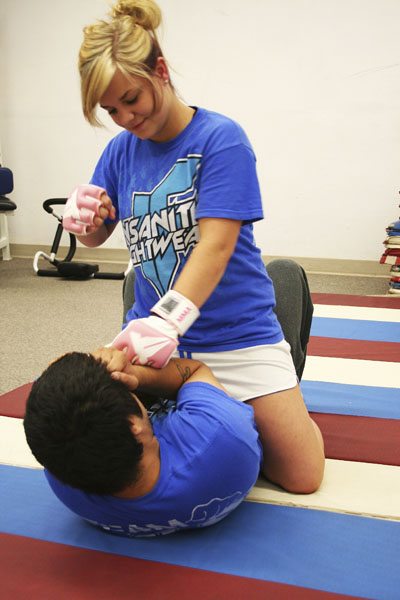 Bruises on top of bruises, sore muscles and the occasional black eye. They square up with bandaged hands and stand their ground with bare feet.

It takes skill, endurance and heart to hold their own in the cage for the allotted time. In pursuing their passion, mixed martial arts fighters take a brutal beating. For Brooke Possehl, holding her own is about more than just perserverence in the cage.

Possehl, 19, is the only female fighter on Team KO, an Albert Lea mixed martial arts team. There are 32 fighters total, ranging from grade-school children to adults. However, only 10 fight regularly because of age limitations, and only adults 18 and older are allowed to compete.

Team KO has been growing over time mainly through word of mouth.

“One of my friends, Spencer Edwards, knew the lady that owned the gym,” Possehl said. “I’ve loved it ever since. It’s my stress reliever.”

Mixed martial arts is a full contact combat sport. It’s a combination of wrestling, boxing, Brazilian jiu-jitsu, kickboxing, karate and a few other styles. The biggest challenge for the 5-foot, 1-inch lightweight is her size. Possehl said it’s hard being so small, but she has to work harder to find ways to use it to her advantage.

Practices include grappling and sparring with members of the team, meaning Possehl is always up against the boys. One of her worst injuries at practice was when she hyperextended her elbow during a fight.

“She’s the only female, so sometimes she gets pounded,” said one of the founders of Team KO, Connie Bolinger. “She’s also tougher than some of the guys on the team. She can also throw them around like rag dolls, including our head trainer.”

Bolinger and her husband started the program back in April of 2009. Team KO began practicing at the Albert Lea Family Y. In February 2011, the Y started sponsoring the team, and now allows them to practice in one of the rooms downstairs.

Most of the competitive fights are organized through the promotion outfit Brutal Genesis, which lists rankings and statistics on a website. Team KO has a big show coming up on Oct. 14 in Austin at Torge’s. Possehl is unsure if she’ll be on the card to fight yet. She plans to go to Mississippi for a while.

“She won’t leave us for good,” Bolinger said. “She loves us too much, and she’s too good.”

“I’ll never forget winning my first fight,” Possehl said. “I almost started crying in the middle of the cage; I was so happy.”

For Possehl, Bolinger and the other members of the team, everyone feels like family.

“I love having everyone over for cookouts, driving to the fights together and just spending time with everyone,” Bolinger said. “It’s like being their mom, we’re one big happy family.”

In addition to bringing people together, Team KO also helps keep the participants out of trouble. If anyone fights outside of the gym, they’re automatically suspended.

Team KO also does good things in the community together. They’re nearing the end of one of their fundraisers for breast cancer. They’ve been selling pink “Team KO” shirts. The $700 check will be presented to the foundation once the final shirt has been sold. Their current fundraiser is for a friend, Callen Seberson, who was recently diagnosed with multiple sclerosis. The orange shirts for him are available now.

“The best part of fighting MMA with Team KO is the people you meet, the time you spend with them and everything you learn from each other,” Possehl said. “MMA is my passion.”