She sells caramels at the market 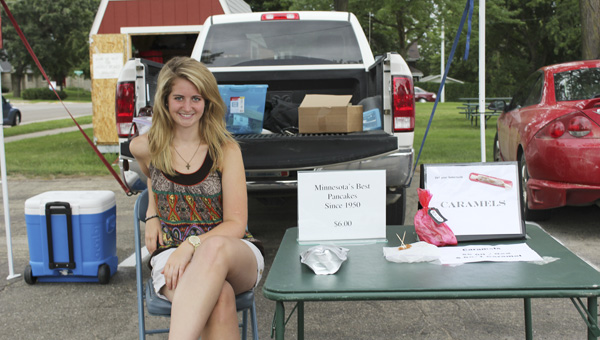 Ashley Petersen sits behind her table at the Albert Lea Farmers Market in July, where she sold homemade caramels for $5 for a bag of 15 or $1 for two. -- Jill Jensen/Albert Lea Tribune

Ashley Petersen spends four hours in the kitchen every day during the Christmas season in an attempt to keep up with buyers’ demands of homemade caramels.

This summer, she continued her success in an entrepreneurial effort to earn money for college expenses.

The recent high school graduate started a company to make and sell homemade caramels at different venues in order to pay for her tuition at the University of Iowa this fall.

“That’s my goal this summer — to raise money for college,”Petersen said.

The 18-year-old has been making and selling caramels with her family since she was too little to do more than wrap them. 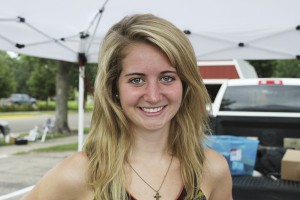 She said after she and her family discovered the success they could have when they sold caramels as a fundraiser for a trip to Croatia, they began to sell them to raise money for mission trips and to sponsor children in Honduras.

“We wanted to give the money back instead of using it for whatever we want,” Petersen said.

Petersen’s mother, Jill, said their reputation has grown over the past few years, largely because customers are keen to “support our kids’ ideas of supporting other people.”

“So far, it’s been a great service project and I think taking it the next level teaches her a little bit about business,” Jill said. “Now it’s a learning opportunity in a whole different avenue.”

Petersen “teamed up” to sell her caramels at the Albert Lea Farmers Market with Dennis Brue, who owned the B&B Café for 24 years. She sold his homemade pancake mix alongside her caramels every Wednesday and Saturday.

Brue said while he gets back the cost for making and packaging the pancakes, he gave Petersen the rest of the profits.

“I’m just trying to help her out, and it gets me out there more, too,” Brue said.

Brue, who is often busy selling corn dogs at Bruno’s Corn Dogs, said Petersen helped him out by giving him another venue to sell his pancake mix and promoting his product. He said he anticipated she would sell “a ton” of caramels at the Farmers Market after tasting the product himself.

Brue isn’t the only one who enjoys Petersen’s caramels.

For the past five years, Mary Stapleton has bought caramels from the Petersen family during the Christmas season.

“They’re really, really good,” said Stapleton, who first tried the caramels when the Petersens gave a sample to their neighbors. “It just goes for a good cause.”

Stapleton said she often gives them as a gift to family members. She said though her children are grown up now, they still expect caramels as a “tradition” at Christmas.

Petersen said her family, which also sells caramels during the winter holiday season, normally cannot keep up with demand during this time period. Because of this success, she said she decided to try to extend the business into the summertime.

But while Petersen made money for her college fund, she said she took away more than profit during her sales venture.

She said the best part of selling the caramels at events like the farmers market and the Red Power Roundup is meeting new people and learning their stories.

“It’s a good place to talk to people and get to know them,” she said.