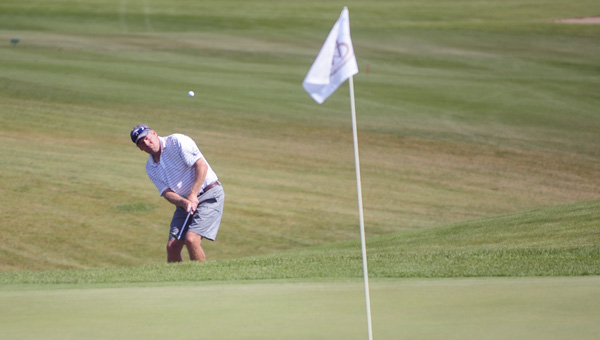 In its third summer in operation, Wedgewood Cove Golf Club didn’t have a marquee event. That changed over the weekend.

The young course held its first annual Wedgewood Cove Invitational, also known as The Shootout, on Friday and Saturday, and only hours into the tournament’s second day, the club’s head golf professional, Donnie Teeter, already had big expectations for next season’s. 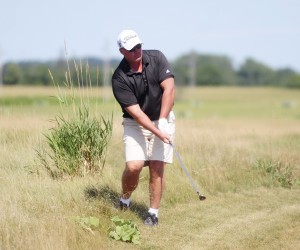 A golfer chips out of long grass and onto the green Saturday at Wedgewood Cove Golf Club. -- Andrew Dyrdal/Albert Lea Tribune

The inaugural Shootout drew 30 two-person teams divided into five flights. Playing in a handicapped best-ball format, each team played five nine-hole matches against the other teams in their flight. The tournament culminated on Saturday afternoon when the winner of each flight played in a four-hole shootout to determine the overall champion. One team was eliminated after each hole until only one was left standing.

Teeter said The Shootout took months of planning and was something he envisioned when the course opened in 2009.

“Since I toook this position, and talking with our owners, we’ve wanted our own marquee event,” Teeter said. “This will be it.”

Though the tournament hadn’t concluded, Teeter called it a “huge success” Saturday and something players will mark on their calenders a year in advance.

“Everybody I’ve talked to is impressed with everything from the golf course, to the meals and the gift bag,” Teeter said. “They’re just having a really good time.”

Though the entry fee was $200 per person, Teeter said once players get over the “sticker shock” they will find out it’s a really good deal. Each player received a Wedgewood Cove shirt, windshirt, hat and glove, and a sleeve of Titleist Pro V1 balls — a prize package that is retail priced at nearly $200 in the club’s pro shop. Golfers also received appetizers on Thursday night sponsored by Crossroads Trailer, three meals on Friday, including a steak dinner, and breakfast and lunch on Saturday. Not to mention the guaranteed 45 holes of golf.

Teeter said because Wedgewood Cove is a public course, The Shootout is open to anyone. He said he gave the course’s regulars, including season pass and punch card holders, and league members the first chance to sign up.

While there was no prize money awarded, Teeter said golfers can profit from the weekend through a calcutta auction and parimutuel betting. Teeter said teams received $50 if their flight’s champion won the overall championship.

After the field was full, Teeter divided the 30 teams into five flights based on combined USGA handicaps. He said next year he expects to have a full 42-team field divided into seven flights.