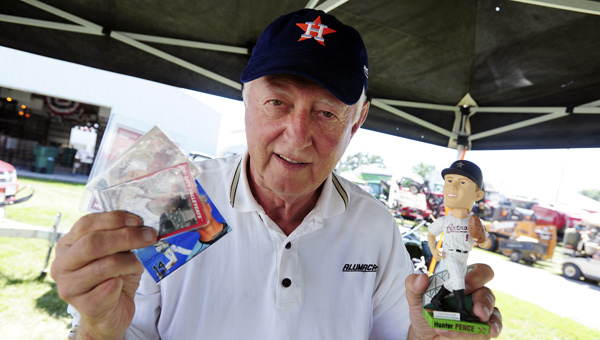 Larry Pence, of Albert Lea, stands Wednesday at the Freeborn County Fair wearing a Houston Astros cap and holding signed baseball cards and a bobblehead doll of Hunter Pence, his first cousin, who was recently traded from the Astros to the Philadelphia Phillies. Hunter, a two-time MLB All-Star, has family in Albert Lea, Geneva, Blooming Prairie and Owatonna. -- Andrew Dyrdal/Albert Lea Tribune

That’s because Larry’s first cousin, Hunter Pence, was traded Friday from MLB’s Houston Astros to the Phillies, where he’s suddenly in the heart of a National League pennant race.

Hunter, 28, was born in Fort Worth, Texas, to Howard and Gail Pence. He has roots in southern Minnesota, though. Hunter’s father, Howard, and his grandfather (Larry’s uncle), Phil, were born in Geneva and graduated from high school there. After graduating from Ellendale-Geneva High School, Howard moved to Texas, was married and began raising a family.

Year’s later, Larry began following his cousin’s rise to baseball superstardom. Hunter played shortstop at Arlington High School, in Arlington, Texas, and later attended the University of Texas at Arlington. In 2004, Hunter was drafted by the Astros with the 64th pick.

With much of the Pence family in Texas, Houston was the perfect landing spot for Hunter. Larry followed his minor league career through phone calls to Howard and then on April 28, 2007, there was a surprise on TV.

Larry and his wife, Vikki, were trying to tune in a Twins game when they stumbled across the Astros playing the Milwaukee Brewers on air. Larry followed the Astros only because Hunter was in their minor league system — or used to be.

Moments after settling on the game, Larry saw an Astros player dive into third base. He looked familiar.

Sure enough, when the Astros player with No. 9 stitched into his uniform turned his back, Larry read the name “Pence.”

“I got goose bumps,” Larry said.

So began Hunter’s outstanding, young career, which Larry has followed closely ever since.

Hunter was 100 games into his fifth season with the Astros when he was traded. The two-time All-Star outfielder was batting .308 with 11 home runs and 62 RBIs, and was considered one of the top offensive players on the trade block. Larry said he began hearing rumors three weeks ago that the Astros, who had the worst record in baseball, were planning on trading his cousin.

“I couldn’t figure out why you would want to trade your top baseball player,” Larry said, later acknowledging that the Astros didn’t want to resign Hunter, whose contract expires at the end of the season, to an expensive, long-term deal.

Larry heard on ESPN’s SportsCenter that Hunter could be traded to the Atlanta Braves, Boston Red Sox, Phillies or Los Angeles Dodgers. Larry said at the time he preferred the Dodgers because Hunter would get more recognition in a large market, but he’s happy he signed with the Phillies, who are a favorite to win the World Series.

“He’s got more of a chance to be an MVP of a World Series and become a better baseball player,” Pence said. “He’ll have better coaching, which he didn’t have in Houston.”

While Hunter was undoubtedly sad to leave the franchise he had spent his entire career with — in the state he had spent his entire life in — he went from worst to first, literally, in the trade. At the time of the trade, the Phillies were 66-39 and in first place in the National League. The Astros, meanwhile, were 35-71, last in the league and 31 ½ games behind the Phillies.

Larry saw Hunter play in person once while he was with the Astros. The Astros were playing the Minnesota Twins at the Metrodome in 2009 and Larry was able to talk to Hunter before the game.

Larry said Hunter was a “god” in Houston, and at every game over half of the Astros jerseys worn by fans said “Pence” on the back. According to Larry, Hunter’s departure from Houston sparked rumors that he left because there he wouldn’t receive the high-paying contract he demanded. While Hunter is due to make $6.9 million this season, Larry attests his cousin doesn’t care about the money.

Hunter stayed in Albert Lea in the fall of 2009 to visit family and friends, and sign baseballs for a charity. Larry, Howard and Hunter planned on going to Diamond Jo Casino in Northwood, Iowa, but before leaving, according to Larry, they asked Hunter if he had any cash. He did — two single dollar bills.

Jerry Crasnik on ESPN.com recently echoed those same testaments to Hunter’s unselfishness in a column titled “Brotherly love for Hunter Pence.” In the column Crasnick quoted baseball great Craig Biggio as saying: “Hunter Pence would play the game for nothing. He’s old-school from that standpoint. He epitomizes the way the game is supposed to be played, and it’s hard to find guys like that anymore.”

“The town of Geneva follows him a lot, “Larry said. “I get calls all the time from people wanting info on Hunter.”