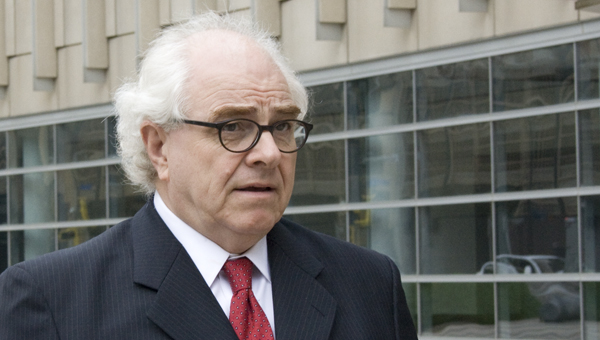 While most were pleased to hear Tuttle will at least spend 3 1/2 years in a federal prison — instead of simply probation — they questioned how she will be able to pay the full $1.3 million in restitution that the federal judge ordered.

“How’s she going to do this?” said even her own lawyer, Kevin O’Connor Green, in the hall after the sentence was given.

The $1.3 million figure is the amount Tuttle was found to have stolen from her company, Albert Lea Abstract Co., and diverted for her own personal use.

U.S. Attorney Nancy Brasel, who prosecuted the case, said there were 50 victims involved.

The victims ranged from people who were planning to buy a home, to people who work saving up for a big project, to others who were engaging in land transactions.

For the Freeborn County Humane Society, it was about a new beginning for homeless Albert Lea cats and dogs.

The organization had been given a $150,000 donation planned to be used for a shelter addition, but that was ultimately liquidated by Tuttle through an escrow account at her company.

Former Albert Lean Steve Leuthold, who helped initiate the donation to the Humane Society, spoke adamantly prior to the sentencing order about the effect Tuttle’s decisions placed on himself and the Humane Society.

He said he and the organization were set to break ground on the new addition last summer when they found out about Tuttle’s actions. Their money was not covered by insurance.

They had hoped to not have to turn away any animals during the winter.

“What people need to understand is that there were animals we couldn’t help,” said Humane Society volunteer Dee Amberg. “They paid the ultimate price.”

The society has held pancake breakfasts, rummages sales, events at the local farmers market, bowl-a-thons, raffles and other fundraisers since to try to make up for the lost money.

“The people down there have worked so hard to make these improvements,” Leuthold said.

While a lot of the money has been raised in the year since news about Tuttle was first released, there is still much work to be done, he said.

He noted he thinks he might still be able to get the lost money back through the banks that did not enforce proper procedures. He said he plans to bring civil suits against the banks involved.

He said he was disappointed in the trust he placed in Tuttle and noted he supported a higher prison sentence.

She said she personally dealt with many of Tuttle’s victims and tried to resolve claims.

Her staff and company incurred a large amount of losses and staff hours from doing so.

“This has really resulted in a great deal of tarnish on our industry,” she said.