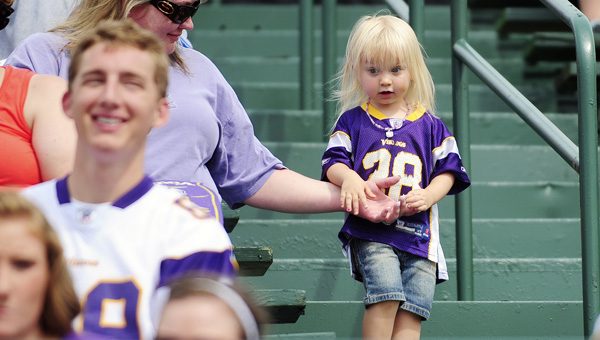 A little girl in a purple Adrian Peterson jersey descends the bleacher’s stairs Monday at Vikings training camp at the University of Minnesota, Mankato. -- Andrew Dyrdal

MANKATO — The purple’s back. 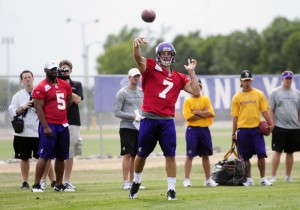 “These last 48 hours being around our players has energized our entire staff,” Vikings first-year head coach Leslie Frazier said. “The attitude that they came into camp with just gives you a lot of hope about our football team and the 2011 season.”

After finishing tied for last in the NFC North last season, the Vikings began working toward making this year more memorable with the recently acquired, six-time Pro Bowl quarterback Donovan McNabb. The veteran quarterback is sitting out the team’s first four practices, which included Monday’s, but that didn’t mean he wasn’t familiarizing himself with the Vikings’ offense.

“Donovan will get caught up, he’ll get up to speed,” Frazier said. “He’s a veteran quarterback. Although he’s not actually taking the physical reps, as long as he’s out there being around the game and sitting in meetings, he’s getting the mental reps he needs and the rest will come.”

Fans who want to watch McNabb play will likely have to wait until Thursday when the NFL league year begins.

All Vikings players are adapting to new offensive coordinator Bill Musgrave’s west coast-style offense, including Peterson, who could see a benefit from the change.

“We’re going to do our best to exploit the talent that we have with this offense,” Frazier said. “Whether it be Adrian, Visanthe (Shiancoe) or Percy (Harvin), we’ve got some playmakers and there are a lot of things Adrian can improve on, and as great as he is and the fact that he’s on his way right now to being a Hall of Fame player, there’s still some things he wants to improve on.” 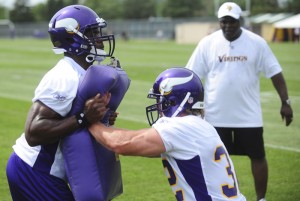 Rookie quarterback Ponder said McNabb was helping him with his fundamentals Monday, including his footwork and that he’s excited to work with him.

“Obviously he’s been there and done it,” Ponder said. “He’s going to help me out along the way and I’m definitely excited.”

Frazier said that it was evident players hadn’t participated in organized practice before Monday because of the NFL lockout.

“Players would come up to me and tell me ‘Working against teammates is not the same as working one-on-one or working by yourself,’” Frazier said. “It’s a totally different deal when you have a coach demanding a certain tempo and a certain pace.”

There’s something for everyone at training camp

Activity at Vikings training camp goes beyond what’s happening on the practice field.

The camp, which is free and open to the public, also features food, drinks and games for children.

The Hy-Vee Food Court has hot dogs, pizza and cheeseburgers, among others, which range in price from $4 to $6. Bottled pop, water and Caribou iced tea is $2.50 and bottled beer is $6.

For kids, training camp has a number of football-themed games including two obstacle courses, mini golf and a football toss. Viktor the Viking, the team’s mascot, is available for photos, and some players may sign autographs after each practice.

MANKATO — Eager to take the field together for the first time this season, Vikings players and coaches shelved their enthusiasm Monday to remember a lost member of the family.

Before training camp officially kicked off at 3 p.m., a moment of silence was on the field next to the No. 77 painted in the grass. Ten years ago Monday, Vikings Pro Bowler Korey Stringer died from complications brought on by heat stroke at training camp on the same field.

“It’s a hard day for everybody,” Vikings head coach Leslie Frazier said in a press conference. “We just wanted our players to take a moment to remember Korey.”

Frazier, who was a defensive backs coach with the Philadelphia Eagles at the time of Stringer’s death in 2001, called the offensive tackle “affable and loved by so many.” He died at age 27.

Fullback Jim Kleinsasser, who has played his entire 13-year career in Minnesota, is the Vikings’ last remaining teammate of Stringer’s. Frazier said Keinsasser talked to the team and explained to them what Stringer meant as a teammate, what he meant to his friends and family and to the Vikings organization.

“It was a sober moment for our team as Jim explained who Korey was, what type of player he was and more so the person,” Frazier said. “Everyone misses him. (We) wished he could come out and watch us practice today but in a way I feel like he was there today. Just having his number out there on the field, I feel he lives on in a lot of ways through the pride that our players have and a lot of people miss him.”

One of the most electrifying and controversial players in Vikings history, Randy Moss, retired Monday after a 13-year NFL career.

When asked about Moss, Frazier called him “The Michael Jordan of offense” and a future Hall of Famer.

Frazier was the Vikings’ defensive coordinator during Moss’s brief four-game stint with the team in 2010. Frazier said he enjoyed working with the seven-time Pro Bowler, who ranks second in Vikings history in receptions, receiving yards and touchdowns.

“We had a good relationship,” Frazier said. “One thing I appreciated about him is he’s a guy who’s a tremendous historian when it comes to football. He could be talking to me about when I played and telling me things that I had kind of forgotten but he knew. I’m proud I got a chance to know him.”