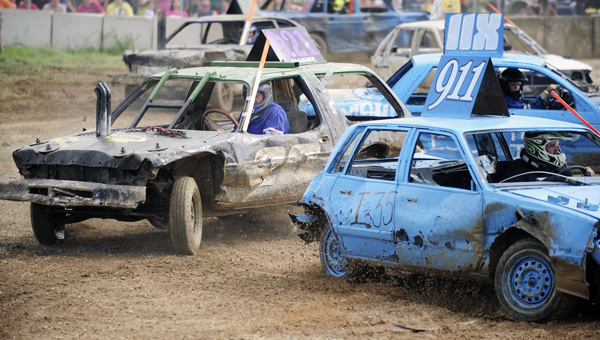 Lee Gulbrandson has driven his truck in the demolition derby for the past four years, including Sunday afternoon on the last day of the 2011 Freeborn County Fair.

This year not only did he win his second derby, presented by the Masters of Disaster, in three years in the truck division, but he got to do something more important. He was able to race in front of his family and with his friends. 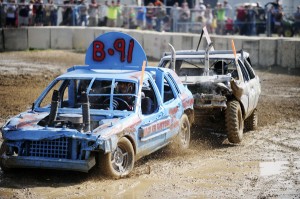 “It is good to put on a show for all of my family and friends out there,” Gulbrandson said. “It’s not like you go out there to beat everyone else; you just go to have fun with your buddies out there.”

His first victory came in the same truck, a 1991 Ford F-250. After last year’s competition he had to replace the back half of the truck with a new one-ton Chevy bed. After Sunday, Gulbrandson said the steering is messed up, and the drive shaft went out at the end of the race.

Gulbrandson beat out Shawn Ellingson and Steve Kluver for the top spot in the truck division. In the division, payoffs were awarded to the top five places. First place won $700, second place $500, third $300, fourth $150 and fifth $50.

In the humid late afternoon’s final feature, drivers took to full-sized cars in an effort to dismantle one another. There were 19 cars to start the event, but only one would survive.

Colton Neuhalfen won after his 11x vehicle survived a head-on collision with the B-100 car of Darren Sonnek. Sonnek placed second with Sheldon Warmka finishing in the third slot. 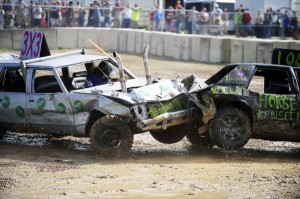 The powder puff division champion Lisa Joel connects with the back of the 108 car at the Grandstand during the Demolition Derby. -- Andrew Dyrdal/Albert Lea Tribune

Neuhalfen provided a thrilling end to the derby. During the final red flag to clear debris from the track, mounds of smoke erupted from under the hood of his machine putting in doubt his ability to continue.

Mayhem ensued with the compact car feature, which had the survivors of two heats early on. The 921 car of Harry Wallem emerged from a three-on-one attack from the other competitors to win the division and earn the distinction of the events hardest hitter.

His 1977 AMC Pacer suffered minor cosmetic damage as well as bent rims and a broken clutch pedal that flew off during a rear-end collision.

Blake Lundmarle limped to a second a place with bent front and rear axles and the 6.2 car of Cody Gaines finished third. The top-three finishers not only survived one another in the feature event, but they all came out of the second heat earlier in the night. The second heat was less brutal than the first.

The derby’s most interesting event may have came in the women’s division, although there was nothing “powder puff” about this contest.

Joel began the race by slamming one of her competition into the cement barrier, almost causing the barrier to leave it’s place. She then employed a strategy of hitting cars in reverse to preserve the engine of the car.

“You definitely want to maintain the front of your car because that is where all the important stuff is,” Joel said. “I wanted to use the back of this car since there is a lot of it.”

The powder puff division winner will be awarded $300, while second place receives $200 and third place $100.

Masters of Disaster was organizing the derby for the fifth consecutive year, bringing a close to the six best days of summer. The dates for the 2012 fair will be July 31 through Aug. 5.