Panthers too much for Tigers (video) 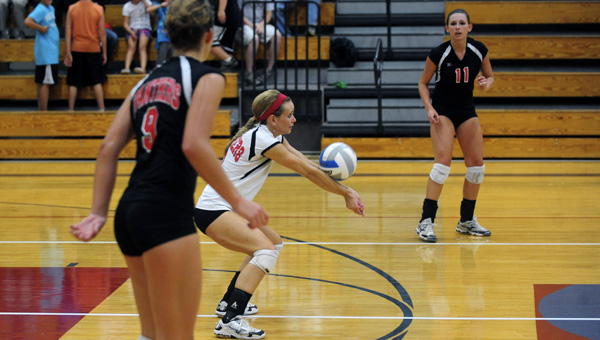 Anna Schlaak can cause damage in the front row and she can serve it up from the back row.

The New Richland-Hartland-Ellendale-Geneva senior can cause nightmares for opposing team’s defenses from anywhere on the court. She did just that in the Panthers’ 3-0 win in Albert Lea on Tuesday night. 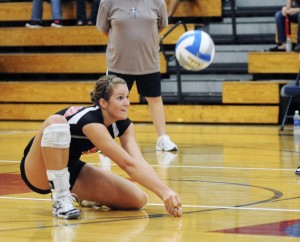 “We were a little shell-shocked by Anna Schlaak. She hits the ball really hard,” Albert Lea head coach Jaime Mauseth said. “We haven’t seen anybody like that this year.”

NRHEG (1-0) dominated the first game of the match, securing the win by the score of 25-8. Schlaak recorded three of her 10 aces on three straight serves for points 10 through 13.

The Tigers (1-2) didn’t stand much of a chance in the first game as they couldn’t find their mark in bounds.

In the second game of the matchup, Schlaak again kept the Tigers on their toes finding herself with four more straight aces to extend the Panthers early game lead to 7-2.

“That jump serve is a wicked serve. It is a great weapon to have,” NRHEG head coach Joe Kuechenmeister said. “It makes you feel pretty comfortable when she’s back there.” 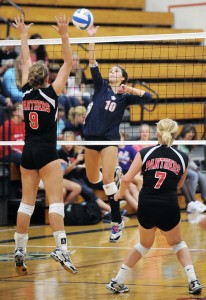 Albert Lea wouldn’t back down this time and came out of a time out firing on all cylinders and keeping the game within striking distance before pulling within four points of the Panthers late in the game.

With seventh-grader Camryn Keyeski serving for Albert Lea, the Tigers were able to rattle off a 5-1 run behind an aggressive defense and flawless offensive movement. The Panthers lead would be too much to overcome as they won the game 25-20.

“After the first game and into the second game they started picking it up and becoming the team that I know that they are,” Mauseth said. “They came back and really fought at the end.”

Schlaak would return for the third game for an encore performance of what she was able to do in the first two games of the night — record more aces.

With the game score at a close 16-13, with the lead in favor of the Panthers, the senior belted another three straight aces to put the Panthers lead out of reach. NRHEG was the 25-15 victors in the third game.

“I’m very happy with our performance,” Kuechenmeister said. “We came out with a lot of energy, and the communication was great which is what your usually concerned about in the first game.”

The win marks the sixth straight match in the past seven years that the Panthers shut out the Tigers.

To go along with the 10 aces, Schlaak also added 20 kills. Carlie Wagner recorded eight kills and Neolle Bartness pitched in with 27 assists.