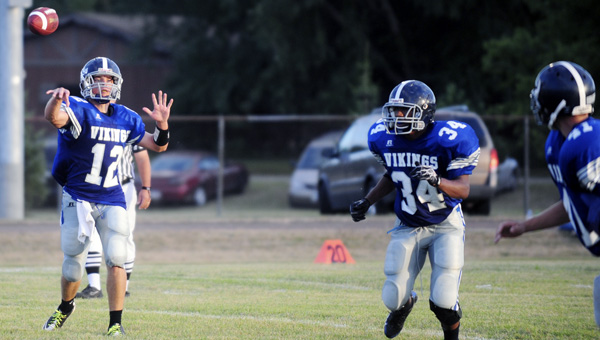 NORTHWOOD, Iowa — For the second consecutive year, this northern Iowa rivalry came down to the closing seconds.

The Lake Mills Bulldogs football team scored a touchdown with 35 seconds left Friday to pull within a point of the Northwood-Kensett Vikings. Opting to go for the win on the road, Bulldogs coach Bill Byrnes called for the two-point conversion, which failed when quarterback Calvin Beal was tackled at the line of scrimmage.

The thrilling finish came after a lackluster first half in which the teams combined for eight fumbles and one interception. The 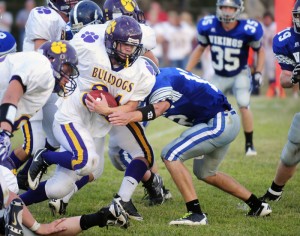 Lake Mills running back Bryan Hengesteg runs with the football Friday during the first quarter of a 21-20 loss to Northwood-Kensett. -- Andrew Dyrdal

Vikings led 13-6 at halftime and swung momentum in its favor when Nitcher scored on a 38-yard run with 22 seconds left in the second quarter.

The second half came down to endurance and defense, and the Vikings had the advantage as they stopped three straight Bulldogs drives deep into its territory and had the game-winning stop on Lake Mills’ two-point conversion attempt.

“Both teams were tired, and I think both teams played hard and left it on the field,” Vikings coach Dave Capitani said. “It was just one of those games where it was going to come down to a two-point conversion the way it looked and we were fortunate enough to get a stop on it.”

The Vikings offense opened up Friday after mustering 164 yards of total offense against Newman Catholic on Aug. 19. The Vikings rushed for 251 yards, and were led by Nitcher, who gained 104 yards on 11 carries. Three different Vikings scored rushing touchdowns and four gained at least 39 yards.

“I thought offensively we were better this week,” Capitani said. “We knew they were tired, and we just had to will some plays. If we could have held onto the ball in the second half it may have been a better situation for us. They gave us a lot of opportunities early that we didn’t take advantage of and in the second half the same thing happened to them.”

Ball carrying was an issue early for the Bulldogs. Nathan Banwart on the game’s first play from scrimmage carried the ball 13 yards but fumbled on the next play. The Vikings recovered and drove to the Bulldogs’ 24-yard line before turning the ball over on downs.

On the first play of the Bulldogs second drive from its own 22-yard line, Banwart fumbled again, but Lake Mills recovered the loose ball. Two plays later on third-and-six, Bulldogs quarterback Beal threw the first of his two interceptions. 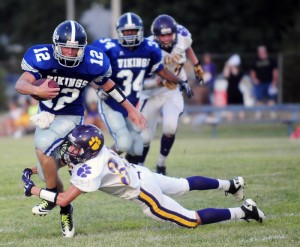 After a scoreless first quarter, the Vikings recovered a fumble at the Bulldogs’ 23-yard line and finally took advantage of a turnover. The Vikings paired runs of four and six yards with a false start and faced third-and-five from the Bulldogs’ 18-yard line. Senior running back Nik Werner broke through the line for a touchdown and kicked the extra point to put the Vikings on top 7-0.

After losing its third fumble and punting, the Bulldogs received a kick start from sophomore Paul Pins. Facing third-and-15 from its own 38-yard line, Beal connected with Pins for a 68-yard touchdown. After a failed two-point conversion, Lake Mills trailed 7-6 and was gaining life with 2:12 remaining in the half.

The Vikings sucked it right back out.

Beginning a drive with 2:06 left in the second quarter, the Vikings converted two third downs and drove to the Bulldogs’ 38-yard line with under 30 seconds remaining. On second-and-10, Nitcher weaved through Lake Mills’ secondary for a touchdown that pushed the Vikings’ lead to 13-6 right before half.

“In that first half we just couldn’t hang onto that ball,” Byrnes said. “Our defense did a great job holding them to 13 points. You’re not going to keep a team out of the end zone, but that touchdown right before half really hurt.”

The Vikings received the second-half kickoff and Tanner Haberman returned the ball to the Bulldogs’ 47-yard line. After converting on third-and-eight, the Vikings drove to the 29-yard line when Haberman broke through for a 19-yard gain to set up first-and-goal. Haberman fumbled at the end of the play, though, and Lake Mills recovered.

Beginning at its own nine-yard line, the Bulldogs strung together the longest drive of the game. With just over nine minutes left in the third, Lake Mills recorded six first downs en route to the Vikings’ 19-yard line. On second-and-four, sophomore Chaden Riles scored on a 19-yard run, and Banwart scored on a two-point conversion to pull the game even at 14-14 with 2:47 left in the third.

On the ensuing kickoff, the Vikings coupled a long return with a facemask penalty to begin its drive on the Bulldogs’ 35-yard line and scored on a one-yard run by Nitcher with 11 minutes left in the game.

The Bulldogs then twice drove into the Vikings’ territory but turned the ball over twice before receiving a third chance late in the game. On third-and-eight with 35 seconds left, quarterback Beal passed to receiver Taylor Nelson for a 14-yard touchdown. Lake Mills’ potential game-winning two-point conversion attempt failed.

“We had a chance to win it at the end,” Byrnes said. “We went for two, and it didn’t work out this time, but I thought our effort was there.”

The Bulldogs rally was stunted with the loss of Banwart, who left the game in the third quarter because of continuous cramps in his legs. The junior, who was plagued with fumbles in the first half, had rushed for 133 yards on 17 carries and was key to Lake Mills’ offensive revival in the second half.

“He’s the hardest worker we have,” Byrnes said of Banwart. “He works year-round on football, and I know he feels bad because that’s not him putting the ball on the ground. I don’t know if he put the ball on the ground once in 3 1/2 weeks of practice. It was tough not having him around in that fourth quarter.”

After losing its season opener to Newman Catholic in Mason City, the win provided some psychological relief for the Vikings. Northwood-Kensett opened the 2010 season with five consecutive losses before winning five of its last six games.

“It takes a lot of pressure off the kids,” Capitani said. “I couldn’t be prouder of our kids last year for starting 0-5 and coming back and finishing the way they did. But you get an early win and it does a lot for the kids’ confidence.”

Capitani said he expected Byrnes and the Bulldogs to go for the win at the end of the game as opposed to attempting an extra point for the tie.

“I would have done the same thing,” Capitani said. “I don’t think either one of us wanted to go to overtime.”