Vincent Elmer Hunnicutt, 90, of Wells, died Saturday, Aug. 13, 2011, at Good Samaritan Center, Albert Lea. A funeral service will be at 10:30 a.m. Wednesday at Good Shepherd Lutheran Church in Wells with the Rev. Greg Ofsdahl and the Rev. Kent Otterman officiating. Burial will follow at Rosehill Cemetery in Wells. Visitation will be from 4 to 8 p.m. Tuesday at Bruss-Heitner Funeral Home in Wells. Bruss-Heitner Funeral Home in Wells is assisting with arrangements. 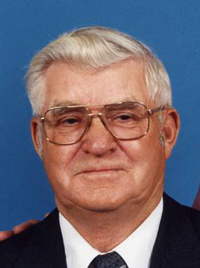 Vincent Hunnicutt was born Sept. 3, 1920, in St. Paul to Edna (Hunnicutt) Schow. He grew up northeast of Blue Earth until moving to Alden at age 12. He married Edna Clara Brandenburg on June 20, 1941, in rural Hartland. He worked for area farmers until he started farming on his own, farming in the Wells and Freeborn area all of his life. They moved into Freeborn in 1991. He sold DeKalb Seed for 50 years and was active in Good Shepherd Lutheran Church in Wells, serving as usher and on church council. He was a member of the Freeborn school board for many years and also drove school bus for several years. He helped organize and establish the Oakview Golf Course and both played and sponsored golf teams.