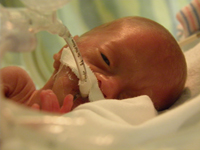 Walker passed away peacefully on July 31 2011, at Tulane Lakeside Hospital in Metairie, La.

He was born on July 23, 2011, in Metairie, La. We experienced Walker’s determination, stubbornness and wonderful personality. Walker was extremely brave and fought the good fight.

He is survived by his parents, Jesse and Ashley Fauber of Cody, Wyo.; his grandparents: Dan and Connie Corcoran of Sheridan, Wyo., Wayde and Jacki Stene of Albert Lea; his uncle, Joe Olson of Albert Lea; his aunt, Kayla Fauber of Lafayette, La.; his great-grandparents: Mike and Carol Ligocki, Jim and Judy Pehringer, Stanley and Patricia Fauber, all of Sheridan, Wyo.; and numerous great uncles, aunts and cousins.

He was preceded in death by his grandfathers: Dan Fauber and Kevin Olson; great-grandparents: Harry and Ardys Modderman, Beverly Modderman, Marlowe Olson and Margaret (Olson) Dowd, Harlan and Janet Stene.

Our precious little Walker is now in the loving arms of the Lord and will remain in our hearts forever.

Walker
The loving hands that hold him now
Have caressed away his sores.
This precious perfect little boy
Will never feel pain any more.

He’s surrounded by a love surreal
With heavenly hosts to bring
Him comfort and security
With each lullaby they sing.

God knows the loss you feel
He knows how much you care
The loving arms that cradle him
Hold him safe until you’re there.