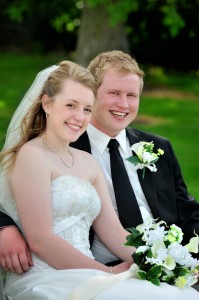 Bryan graduated in 2006 from Mitchell High School, in 2010 from Augustana College with a bachelor of arts in engineering physics and minors in mathematics and government. This fall, Bryan will continue attending the University of North Dakota in pursuit of his bachelor of science in civil engineering.

Flower girl was Eliot Kaemingk, niece of the groom, of Rapid City, daughter of Adam and Hayley Kaemingk.

A wedding trip was taken to Mackinac Island, Mich.