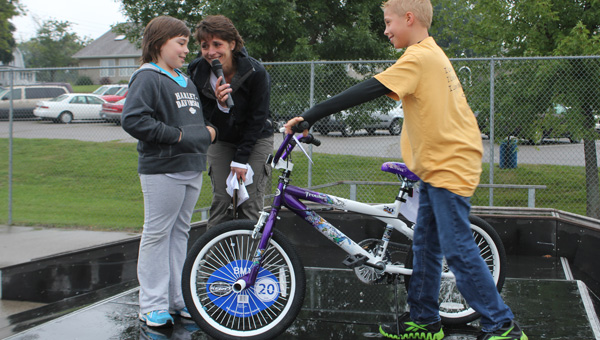 Fifteen-year-old Amity Ricke’s older brother, a soldier serving in Afghanistan, bought her a bike for Christmas last year. This summer, somebody stole it.

Eight-year-old Devin Abrego leaned his bike next to a post in the front yard while he helped his dad in the garage one day this summer. A little while later, the bike was gone.

Thirteen-year-old Alec Edwards rode his bike to the county fair in August. He put it next to a fence and asked an adult to watch it. When he came back, the bike was gone. Alec asked the man where his bike was. “He was like, ‘Oh sorry.'”

These are a few of the stories of children who had their bikes stolen in Albert Lea this summer. One thing the stories have in common is that a thief made a kid sad.

On Sunday, these kids got new bikes, thanks to an effort by family and friends of Culley Larson, a 10-year-old boy whose bike was stolen last month. Culley and his mother, Vicki, gave away bikes to children who had their bikes stolen. They called it 10 Bikes for 10 Kids, the happy ending to a story about kid who loved his bike.

Culley and his mother, Vicki, penned a letter to the editor after his BMX bike was stolen out of their family garage. It was published in the Albert Lea Tribune and caught the attention of national media. Culley was featured on Yahoo, “Good Morning America” and “Fox & Friends,” among others.

It was on “Fox & Friends” where Culley received a Haro Top Am BMX bike from Donald Trump. It even has The Donald’s signature on it. 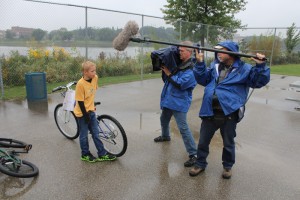 Ten-year-old Culley Larson tells a film crew with "Inside Edition" about how his bike was stolen and why he wrote a letter to the editor about it. -- Tim Engstrom/Albert Lea Tribune

On Sunday, a TV crew from the syndicated show “Inside Edition” was present. So were local media and, despite a light rain, about 120 people.

Nine bikes were given away to children who had their bikes stolen, and a raffle determined the recipient of the 10th bike (which had been intended for a kid who had his bike stolen, but the bike was found).

Many of the kids who came didn’t know beforehand that they would be getting a new bike.

• Tim Christenson, 15, received a red and black bike via a fundraiser through Pizza Ranch.

• Alex Fluth, 13, received a black Haro from an anonymous donor.

• Caden Joyce, 10, received a green and black bike donated by Janelle Tuttle and her son, Jordan, in memory of Jordan’s friend Matt Sundquist.

• Anthony Thorson, 6, received a bike after having his name pulled from the raffle box. The bike was purchased with money from the Pizza Ranch fundraiser.

In addition, Haro donated three new bikes, which went to Mankato Area BMX, a nonprofit organization that does not turn down anyone who doesn’t have the right bike for BMX, said track operator Justin Miller.

The Haro bikes are light, anywhere between 15 and 23 pounds and are ideal for handling the ups and downs of a dirt track, Miller said.

Officers with the Albert Lea Police Department handed free bike locks to the kids who got new bikes. Vicki Larson encouraged all the children to lock their bikes.

PapaMurphy’s Pizza was present to give away free pizza.

The event started around 4 p.m. Sunday with Culley reading his letter to the editor. Vicki described how people from all across America and even from Korea offered to buy Culley a new bike.

“Everybody loses a bike, and for some reason Culley’s story went farther,” Vicki said.

The family turned down the offers and encouraged people to buy bikes for children where they live who had bikes stolen.

“Our point is to move forward and give forward,” she said.

One boy, 9-year-old Caden Stevens, offered to give Culley a bike. Why?

“That made me cry,” Vicki said.