NEW YORK — His family has his spare firefighter uniform, but not the one he wore on 9/11 — or any other trace of him.

Killed at the World Trade Center, 32-year-old Scott Kopytko’s remains were never recovered — a painful legacy of grief for families looking for answers, closure or final confirmation that their loved one was actually a 9/11 victim.

“Very painful and very hurt” is how Russell Mercer, Kopytko’s stepfather, describes it. “And mistrusting of everybody.”

Numbers tell the story in the decade of search and recovery of the remains of Sept. 11 victims — a massive forensic investigation marked by a Supreme Court appeal of families who wanted a more thorough search, and discoveries years after the attacks of even more remains in manholes and on rooftops around ground zero. 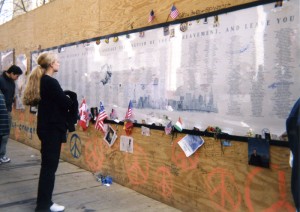 People look at a memorial built in New York City after the 9/11 terrorist attacks. -- Submitted photo

— Tens of millions have been spent, including on the painstaking extraction of DNA from tiny bone fragments, using technology refined from a decade ago.

— Of 21,000 remains that have been recovered, nearly 9,000 are unidentified, because of the degraded condition they were found in. More than 1,100 victims have no identifiable remains.

— And the pace of the process is telling — in five years, only 26 new identifications. Ernest James, a 40-year-old man who worked in the trade center’s north tower, was the last identification, in late August.

“I can’t give a time frame of when an identification is going to be made, if at all,” said Mark Desire, who heads the World Trade Center identification unit for the city medical examiner’s office. “But we are working nonstop.”

Five scientists work seven days a week trying to make new identifications at a lab in an ultra-modern building on the east side of Manhattan. The unidentified remains are stored in climate-controlled conditions under a white tent blocks from the medical examiner’s office. About 400 bone fragments are looked at and analyzed every month.

DNA analysis is done by comparing the remains’ genetic profile to DNA found from victims’ possessions, like toothbrushes; from relatives; or from previously identified remains.

The fragments are examined, cleaned and pulverized into powder to extract tell-tale genetic traces — a process that can take up to a week before an identification is made. Most of the DNA profiles generated belong to previously identified victims.

When an identification is made, the remains are returned to the family. Sometimes, nothing survives the DNA testing. Relatives might only receive the packaging where the remains had been stored.

Desire, assistant director of forensic biology for the medical examiner’s office, says the office won’t give up.

“The dedication of this team … is as strong as it was 10 years ago,” he said in a recent interview.

But the extended search baffles family members like Mercer.

The struggle to identify the 9/11 dead began almost immediately after the attacks in New York City, the Pentagon, and in Shanksville, Pa., where one of the hijacked planes crashed in the woods and plains before reaching its intended target. Forensic teams at the three sites were faced with challenges in identifying victims and the hijackers — some of whose remains are now in the custody of the FBI.

In Pennsylvania, the heat caused by the high-speed crash into a field caused 92 percent of the human remains to vaporize, leaving very little to work with, said Wallace Miller, the county corner who helped to identify the victims. DNA was used to make matches to the 40 victims, plus four sets of remains from the terrorists. To this day, remains are still embedded in the field where the flight went down.

Most of the 184 victims at the Pentagon also were identified using DNA. All but five — where there was not enough material to analyze — were identified, said Paul Stone, spokesman for the U.S. Armed Forces Medical Examiner System.

But nowhere was the forensic detective work as demanding and daunting than at the 16-acre World Trade Center site, where the giant towers collapsed onto the rest of the complex, breaking everything into pieces.

Few full bodies were recovered at all. Then, heat, moisture, bacteria and chemicals like jet fuel combined to thwart the detective work of forensic scientists. Some remains were so badly burned or contaminated that DNA could not be analyzed.

By April 2005, the city’s chief medical examiner, Charles Hirsch, told families his office would be suspending identification efforts because it had “exhausted the limits of current DNA technology.”

Identifications restarted in 2006 amid the discovery of dozens of bone fragments of a 9/11 victim in a manhole renewed a search that found nearly 2,000 new fragments on rooftops and under a trade center road. The latest search ended last year.

Body parts were also recovered at a former landfill in Staten Island, where debris from the site was transferred. In 2008, a judge rejected a lawsuit brought by several families of Sept. 11 victims who sought to move the debris to a plot of land that could be transformed into a cemetery.

What to do with the remains that have been recovered also has stirred up anguish for some families.

As an above-ground memorial to the victims nears opening, some renewed objections to a plan to store the unidentified remains behind a subterranean wall at the National September 11 Memorial & Museum. The museum is to open next year.

“It’s horrendous … that families have to rub shoulders with thousands to go see the remains,” said Rosemary Cain, who lost her 35-year-old firefighter son, George, on 9/11.

Some of his remains have been returned to her, but she said it was important for the unidentified to have a proper burial place.

“They are precious, sacred remains of our loved ones,” she said.

The memorial foundation and several other family members have said they agreed to the arrangement years ago. There will also be a private room adjacent to the repository set aside for families.

Monica Iken said it would be a place where she could go to mourn her husband, Michael, who died in the trade center’s south tower; she has no remains.

“I can go to honor him where he took his last step, his last breath,” she said.

The failure to identify so many victims has affected the final victims’ count over the years The city’s list of the dead — often with multiple missing persons’ reports of the same people — peaked at nearly 7,000 in the months after the attacks, but dropped to 2,752 by the fall of 2002.

Three more names were removed in 2004 after investigators failed to track them to the trade center; including Sneha Anne Philip, a Manhattan doctor who was last seen Sept. 10, 2001, at a department store across from the twin towers. Her name was added back to the death toll in 2008 after her family argued in court that there was no other place she could have been.

And the mystery of who died in the trade center hasn’t yet been solved by science.

Twenty-seven profiles DNA generated so far don’t match any of the approximately 17,000 genetic reference materials that were collected. Scientists aren’t sure who they are.

“It’s an open investigation,” said Desire. “There may be some victims where there are no bone fragments. And they are never going to be identified.”