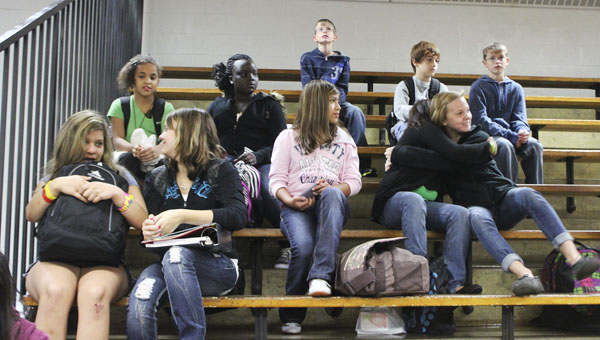 With backpacks full of brand new folders, notebooks and pencils, students started school this morning with chilly temperatures hovering around the upper 40s, which reminded everyone that summer break really is over.

The district will be adjusting to many changes, with the most visible change being the realignment of grades. Elementaries will no longer house sixth-graders, and eighth-graders will be at Albert Lea High School. The realignment means that Southwest Middle School will house two grades who have never been to the school.

Jean Jordan, the former principal at Lakeview Elementary School, will lead Southwest, taking over for Marsha Langseth, who will be an assistant principal at the high school. Jordan and other staffers such as para-educator Paulette Kallberg were directing students where to go in the school this morning. Kallberg said she’s looking forward to working with all the changes that have been implemented. 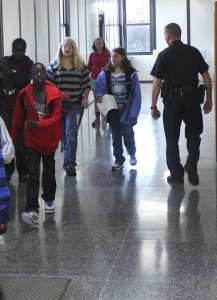 Counselor Jim Munyer said he’s excited to have sixth- and seventh-graders at the school. During the first day students will be with their advisory class all day to talk about the school and how everything works.

Parent and morning supervisor Tiffany Le said she was originally apprehensive about all the changes, but was happy to hear Jordan would be principal.

“Once things became mapped out it was reassuring,” Le said. “There’s lots of changes, but change is good.”

Seventh-grade science teacher David Ware said the school will be gearing curriculum to sixth- and seventh-graders instead of treating them like younger high school students.

Sixth-grader Kalli Citurs hails from Sibley Elementary School and said she’s excited and nervous, mostly about the size of the school.

She said she’s excited to meet new friends and that she’s looking forward to social studies and science classes. Students will have an advisory period each day, and teachers will have a common prep time to help each other plan lessons.

Other changes in the district include each school having wireless Internet, a new food service management company and energy efficiency upgrades. At the high school there will be a “house concept” that will keep eighth- and ninth-graders in the lower E Wing of the school and upperclassmen in the upper E Wing for all core classes.

Principal Al Root said he doesn’t think having eighth-graders at the school will be a challenge. He worked with John Double, assistant principal, to create a new plan for parents who pick up and drop off their children. It will be a transition for parents who are used to using the front office entrance, but Root told the school board that using the commons door will be best for traffic flow.

There is also a lot of change at the elementary level, with one less grade of students and fairly new principals. Halverson will again be led by Matt Esterby, who will be in his second year. Lakeview will see Eric Hudspith as its new leader, who recently was the district’s facilities and transportation director. Hawthorne will see a new principal in Karen Zwolenski who was hired from outside the district when former principal Corrine Tims retired. The only veteran principal is Ross Williams of Sibley.

Superintendent Mike Funk said he’s looking forward to the school year starting and that staff have been working hard to get ready.

“Albert Lea will have a new look, but we think this new look will be better for our staff and students,” Funk said.