A hike on the Esker Trail 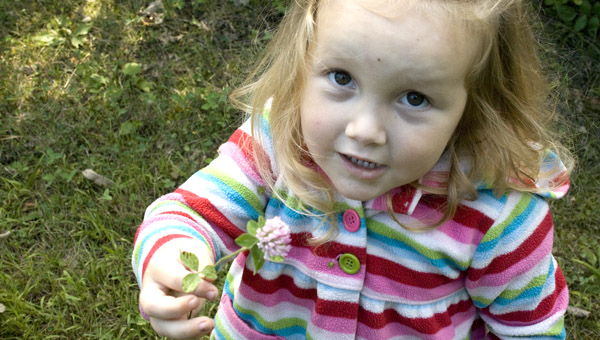 One of the many aspects Sophie Stultz enjoyed from the hike on the Esker Trail was the various vegetation and wildflowers. Here, she picks up one to show her parents. -- Sarah Stultz

My husband, our daughter, our 8-month-old dog and I loaded up in the car Sunday afternoon for a little adventure.

Having a 3-year-old child, it’s been a while since we had attempted a hike beyond a paved trail, but that day we were set out to do just that.

With so many opportunities at our fingertips at Myre-Big Island State Park, we had decided to try out the Esker Trail, which is to the north of the Blazing Star Trail. 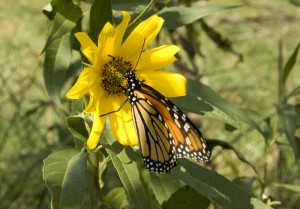 A butterfly comes to rest on a flower on the Blazing Star Trail Sunday afternoon leading to the Esker Trail. The trail was filled with many butterflies. -- Sarah Stultz/Albert Lea Tribune

A month or two ago, we had attempted the same hike. But before we made it out to begin our venture, we stopped at the park’s information center to ask a park ranger where to go to begin and if we could get a map of the trails.

At that time, the woman behind the service desk warned us we would be in for an unpleasant adventure — with humid weather and ravaging mosquitoes — and told us we’d have a much more enjoyable experience if we came back in the fall.

Especially since we had Sophie in tow — and knowing how difficult kids that age can be even in ideal conditions — we succumbed to her suggestion and agreed to come back at a later date. 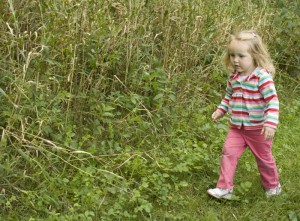 After the area had almost two full days of rain on Friday and Saturday, we were a little nervous to make a second stab at the trail, but we went ahead, and it turned out great.

To get to the Esker Trail we would have to first walk a little more than a mile on the Blazing Star Trail — a paved trail — to where we would reach a crossing trail that linked to the Esker.

We left the park entrance, jumped on the Blazing Star Trail and took off northeast.

We weren’t sure how well Sophie would do on an extended walk, so we brought the stroller along. 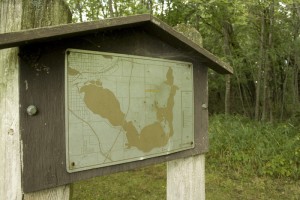 Many of the trails at the Myre-Big Island State Park have these markers to guide hikers along the way. This one was found near the entrance of the Esker Trail. -- Sarah Stultz/Albert Lea Tribune

I pushed Sophie in the stroller while Jason walked with our little miniature pinscher, Chance.

Before we even got too far on the Blazing Star Trail, I found myself quickly drawn to the bright yellow hues of the flowers surrounding us on both sides of the trail.

I hadn’t been on this part of the trail since last summer and had forgotten just how beautiful it is.

My husband, Jason, grabbed a flower to hand to Sophie, and she was tickled pink.

She was already excited to go out for a walk and then to get a flower on top of that, she was thrilled. 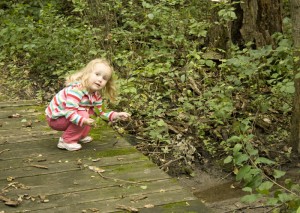 The next thing I know, my husband — who’s gearing up for deer hunting season in two months — starts talking about areas where it looked like deer had been wandering through the prairie grasses.

As we continued down one part of the trail and curved back up a hill, he pointed to a mother and baby deer in the distance to the left.

Seeing that, he was about as tickled pink as Sophie was being handed that flower.

We pressed forward to where it looks like the trail is going to turn into a gravel road and then cut over on the crossing trail, over a railroad track to where we would finally begin the Esker Trail.

At that point, Sophie wanted out of the stroller and was ready to be adventurous.

From then on, Jason and I took turns pushing the empty stroller and walking Chance while Sophie walked along with little or no complaints.

We encountered many different kinds of vegetation, some other kinds of flowers and even some more deer from a distance. In the scope of our relatively brief hike, we saw five deer.

Some parts of the trail were relatively flat, while others had relatively steep hills — nothing too intense though.

Sophie had no problems hiking even the hilly parts and would often call out to us to look at one thing or another.

While we could have gone much further, we went at least a mile and a half on the Esker Trail and then headed back to the Blazing Star Trail to head back home.

By that point, Sophie willingly agreed to climb back into the stroller for the last mile down the Blazing Star.

While bringing along the stroller was a little bit of a pain in a few instances on the Esker Trail, we were glad to have it for both the beginning mile and end mile of our adventure.

The trail continues around near four remote backpack camping sites along Albert Lea Lake, which can also be reached by canoe.

With so many opportunities to offer, we discovered it’s no wonder why the trails at Myre-Big Island State Park are a big hit.