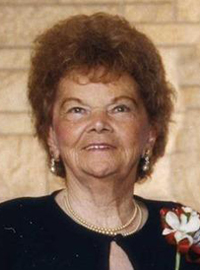 Addie was born on April 17, 1923, in Delavan, to Anton and Alma (Handeland) Peterson. Adeline grew up on a farm and attended school in the Blue Earth area. Adeline moved to Austin in the early 1940s. On Aug. 16, 1942, she married Henry “Hank” Carlson at the Methodist Church Parsonage in Winnebago. She worked at Hormel for 34 years in the Dry Sausage Dept. Adeline was a member of the Royal Neighbors, Mothers Club and Women of the Moose. She was very proud of her Lefse that she gave to many friends and family members for many years. In her spare time, she liked to knit, work on puzzles, dance and talk, and have a good time. Adeline was known as “Nanny Hank” to her grandchildren and great grandchildren.