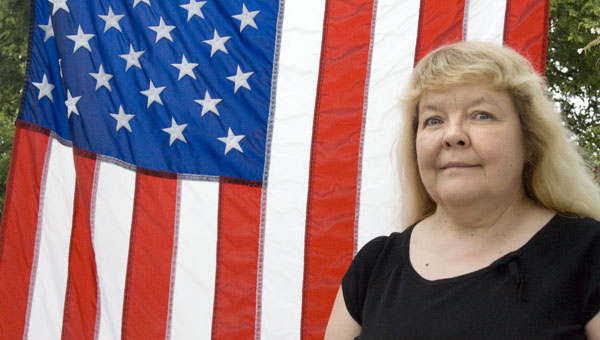 Albert Lea resident Pamela Slette worked only a block away from the Twin Towers on 9/11 and witnessed much of the devastation first hand. Despite all of the horror she observed, she said she was amazed with the goodwill that came out of that day in the weeks that followed. -- Sarah Stultz/Albert Lea Tribune

It started out as what Albert Lean Pamela Slette remembers as a perfect day.

She said it was sunny and clear — what she described as the most beautiful day outdoors in the downtown New York area.

But that quickly changed.

About 8:45 a.m. that day, Sept. 11, 2001, one of her co-workers told her the World Trade Center had been attacked and told her to leave the building right away.

“I thought he was joking,” Slette said. “It was surreal. It was so odd to have that happen at that time because it was such a perfect day.”

Slette worked at the New York Mercantile Exchange, about a block away from the Twin Towers. She and her co-workers ran to the windows of their building.

“We went to the window to determine if it was true, that it actually happened,” she said. “I said this cannot be true. I cannot believe it.”

They saw that a plane had crashed into one of the towers; they began to evacuate their 15-story building.

That started what Slette described as a “massive exodus” from that area up the West Side Highway. But before she left, she called her mother in Albert Lea to tell her she was safe. Then she joined the thousands on the streets.

As they were heading out of the building, the second plane hit the second tower. 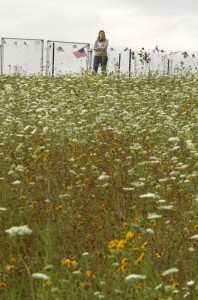 A visitor to the temporary memorial to Flight 93 views the crash site from an overlook on Sept. 8 in Shanksville, Pa. The new Flight 93 National Memorial will be dedicated on Saturday, Sept 10, 2011. Sunday will mark the 10th anniversary of the attacks of Sept. 11, 2001. -- Gene J. Puskar/AP

“It was just a surreal situation,” she said. “Every time I turned around to look back at the World Trade Center, a bit more had collapsed. It was just an awful, awful day.”

She walked about five miles and went to a prayer service at a Presybterian Church. That’s when she heard that blood donations were needed, so she went to donate blood and then finally headed home.

Albert Lea High School graduate Tom Herwig said he was coming in on a commuter train from the Hudson River Line and saw the first of the Twin Towers smoking.

The train goes into a tunnel and into Midtown Manhattan and ends up at Grand Central Station. It was there on a TV set that he saw a plane crash into the second tower.

He quickly thereafter went to his office at the United Nations, which he estimates was two or three miles away from the Twin Towers. He had been working there for 14 or 15 years.

“A whole bunch of us at the office sat in the corner office and looked out and watched the towers burning,” Herwick said. “Everybody was just in shock, and when the second tower was hit by the second plane, everybody was afraid because we assumed it was a terrorist strike and thought we might be next.”

People started to evacuate from the United Nations. Herwick decided he was going to try to catch a friend of his three miles north.

“I didn’t know where to go,” he said. “I didn’t have anywhere to go, so I decided I was just going to go to his place.”

Using a walker because he suffers from multiple sclerosis, he joined what he described as tens of thousands people leaving the city.

Everyone was headed north — no one was going south.

He would walk a ways and then sit down on his walker and then walk some more and rest some more. If it weren’t for his walker, which had a slip-down seat, he said he wouldn’t have made it.

While he was walking, he said he remembers seeing people going by who were covered in soot. The people were quiet, but he remembers hearing a lot of sirens. At one point there was what he described as “the scream” of an F-16 fighter jet passing overhead.

“That scared everybody because the word on the street was that there were other passenger jets unaccounted for,” he said.

When he finally arrived at his friend’s apartment, probably three or four hours later, his friend was not there, but there were 12 to 14 others who had the same thought he did.

They all stayed at the apartment that night.

“I didn’t watch TV,” Herwig said. “I didn’t feel like watching the TV. I watched them with my own eyes and somehow I didn’t want to see it on there.”

He found out later about a third plane had crashed into the Pentagon and a fourth plane crashed into a field near Shanksville, Pa.

About 40 miles away, Alden resident Rich Mirelli was in his truck delivering ice cream.

Mirelli, who is now the Tribune’s mailroom manager, said he was listening to “The Howard Stern Show” on the radio when he heard about the first plane that crashed into the north of the Twin Towers.

He was out of the truck delivering ice cream in a gas station when he saw the second plane hit the second tower.

The man behind counter at the gas station was Pakistani and said something Mirelli said he will never forget.

The man told him: “Your country deserves this.” He explained he used the United States to make money to send back to his country.

Mirelli then left the store.

He said he was back in his truck driving when he heard that the Pentagon got attacked. After talking to his boss, he decided to end his day early.

By the time he got home, within an hour, he saw the towers fall with one of his friends.

“I didn’t really think anything,” Mirelli said. “I just couldn’t believe that they actually had the smarts to take over planes and use them as missiles — to use our own stuff against us. And especially getting to the Pentagon —that really blew my mind.”

Albert Lea resident Nancy Rosenberg was about to step into the shower when the second-story condominium where she was at with her mother began moving.

About four miles from the Pentagon, Rosenberg said a new gas line had just been put in outside of the condos, and it sounded as if there was a huge explosion.

“It was terrifying,” she said.

She peeked her head out of the bathroom door, afraid of what she would find, and then immediately called 911.

“What they said to me was, ‘You tell us what’s going on,’” she said. “‘We’re getting calls from everywhere.’”

She had been in earthquakes before, but she said this was worse.

“I immediately didn’t know what to think or do.”

Luckily, there were three Marines living below, and one came up and knocked on the door. He told them to turn on the TV and said the country was under attack.

Immediately, her thoughts turned to her mother, who was in a wheelchair. How would she take care of her?

She sat with her mother and watched, seeing that at least one of the Twin Towers had been hit.

At that time, they didn’t know the Pentagon had been hit, but they figured that what they had experienced was probably related.

“He said, you wait, and within the next half hour you’ll know,” Rosenberg said.

In the next few minutes, they heard on the radio that the Pentagon had been attacked and from that point on, it was “absolute mass chaos and confusion and hysteria.

“Everything happened so quickly, it was almost too much to take in. I remember my mother looking at me after the towers came down, and she asked if it was a movie.”

Rosenberg said she felt as if she had no control, that she couldn’t even protect herself.

But then it got worse.

“It was terrifying,” Rosenberg said. “We were getting all these reports.”

The hysteria continued in the news for quite a while, but by the afternoon reporters had clarified what had happened.

“For that day, for those moments, hours, it gave me an appreciation for every human being on this planet who lives in an impact zone and goes through anything like this,” she said. “Because it affects you.”

Meanwhile, all land lines were down and cell phones were inoperable.

Her husband was in Croatia and tried to reach them but was unable to for a while.

In the weeks that followed, Rosenberg said nothing was ever the same again in Northern Virginia or the Washington, D.C., area.

Military Humvees would drive by, officials would stand with weapons and jets flew over where they lived, shaking the house every time.

There were checkpoints instituted, bomb threats being made and then warnings given about suspicious packages.

“They did impact how we operate,” she added. “It was just a nightmare being there. All I could think about was what’s next?”

Herwig, who now lives in Rochester, said in the aftermath of the attacks he listened and read reports about what had happened, but he never wanted to go to Ground Zero to see for himself what took place.

“It’s a pretty emotionally charged place,” he said. “I saw it happen and I didn’t feel a need to go there.”

Mirelli said in the weeks that followed he remembers seeing the funeral processions of people who lived in his area.

Though he didn’t know anybody personally who died from the attacks, he said there were six regular customers of the Gilgo Beach Inn — where he delivered ice cream — who died.

Now, 10 years after the 9/11 attacks, the memories of that day are affecting people in different ways.

Mirelli said he is concerned that the next generation of Americans will forget about what happened on 9/11.

“It’s just going to be another day to future generations,” he said.

Many of the attitudes held before the attacks have again become the norm.

For Rosenberg, it was about standing up and trying to make her voice be heard.

She said having lost her 21-year-old cousin during the Vietnam War, she didn’t want to see another family have to experience that.

She focused her efforts on protesting against the U.S. going into Iraq.

She took an active role protesting on and off for about two years following the attacks.

“We had hoped to stop something, but we weren’t successful,” Rosenberg said. “I just didn’t want people to lose lives there. After what happened with our family, I just didn’t want another family to have to go through that.”

For Slette, she said she was impressed with the spirit of Americans, and especially New Yorkers, walking tall and overcoming such tragedy.

“It just makes you grateful when you see how people respond,” Slette said. “It makes you worry less and wonder less about the nature of evil — when good can overcome it.”

She said she hopes the attacks changed America’s values — to value things that are of a quality that bring good instead of evil.

She moved back to Albert Lea in 2003 and has often thought about that day.