The funeral service for Albertha W. Stenzel, of Albert Lea, will be held at 10 a.m. Saturday at St. Theodore Catholic Church, Albert Lea. The Rev. Timothy T. Reker and Deacon Mike Ellis will officiate. Interment will be in St. Theodore Cemetery. Visitation will be from 4 to 7 p.m. Friday at Bonnerup Funeral Service, Albert Lea, and one hour before the service at the church. 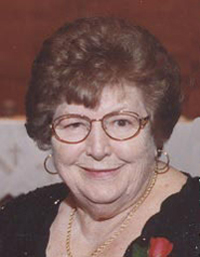 She was born on March 18, 1929, in Los Angeles, Calif., the daughter of Paul and Marie VanHouten. The family moved to Minnesota, where she graduated from high school. She married Phillip Stenzel in Minnesota Lake, and they had made their home in Albert Lea since 1960. She had worked for Banquet Foods in Wells for more than 20 years and had also been a hairdresser. Albertha was a member of St. Theodore Catholic Church, and the Elks and Eagles Auxiliaries. She liked baking and cooking and especially enjoyed the company of family and friends.