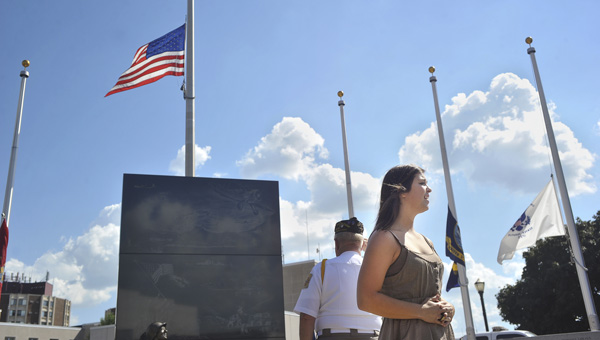 AUSTIN — It was a sunny day in New York when two airplanes crashed into the World Trade Centers, sparking fear in Americans and eventually killing more than 3,000 people in what would be known as the 9/11 attacks. It was an equally sunny day when local residents gathered to commemorate Patriots Day and the 10th anniversary of 9/11 at the Veterans Memorial in Austin Sunday. 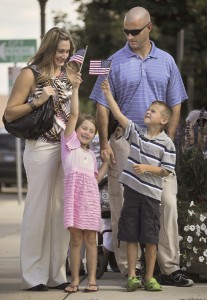 Brother and sister Dawson and Aggie McKichan wave flags in front of their parents Capt. David and Andrea McKichan before a Patriot Day ceremony at the Veteran’s Memorial. -- Eric Johnson/Albert Lea Tribune

“We can’t forget about their sacrifice,” local veteran Norm Hecimovich told a crowd of more than 100 people at the Mower County Veterans Memorial Sunday afternoon.

The 10th anniversary meant plenty to the veterans, servicemen, residents and families that gathered there. For Michael and Rose White, it meant going out to see the pavers their family bought for Michael and his father Gene.

More than 800 pavers are at the memorial, according to Hecimovich, with another 200 up for sale which goes into a maintenance fund for the memorial.

Two new additions were unveiled at the 9/11 ceremony Sunday: A golden eagle to represent the U.S. and a memorial plaque for the 85,000 soldiers considered POW and MIA.

For Wayne Huinker, being a part of the ceremony was very important. Coming from a long line of servicemen, two of his five sons, Jason and David, are serving in the Air Force with David about to embark on his third tour of Afghanistan. Wayne, who served in the Air Force in Vietnam was reminded of why he decided to enlist when he watched the ceremony and why it was important to remember 9/11.

“My brothers and sisters paid the price so that I can enjoy these freedoms,” he said. “A lot of people gave their life that they shouldn’t have had to give. We owe it to them to remember it always.”