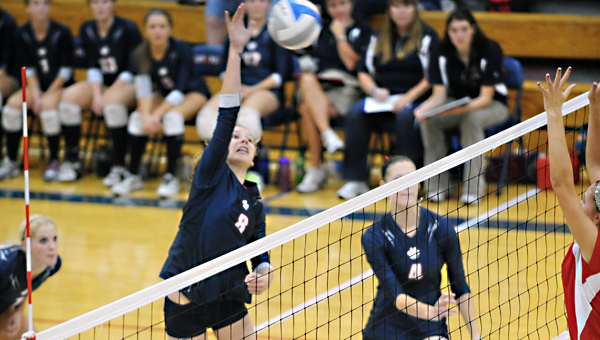 Albert Lea sophomore Sydney Rehnelt attempts a kill Tuesday during the third game of a loss to Austin. -- Andrew Dyrdal

The night after a rousing come-from-behind victory over United South Central, the Albert Lea volleyball team lacked the same fire and was swept Tuesday by the winless Austin Packers.

The Tigers lost two close games but started Game 3 on a 4-0 run and looked poised for another unlikely comeback, this time in from of its home crowd. But the Packers took over the lead at 8-7 and never trailed again winning 25-23, 27-25 and 25-18.

“Our heads just weren’t in the game,” Tigers coach Jaime Mauseth said. “We weren’t playing like the team that we can play like.”

In search of its season’s first win, the Packers (1-7, 1-2 Big Nine) gave the Tigers plenty of chances to win Game 3. Leading 13-9, the Packers committed six consecutive service errors but the Tigers didn’t gain a point on Austin during that stretch.

It was just one of those nights.

“Austin was practically saying, ‘Here, take this game,’”Mauseth said. “We weren’t taking advantage of any situations that they’d give us. They’d give us a break and we’d give them the ball back with a missed serve.”

Mauseth said the Tigers were playing “not to lose” and lacked the enthusiasm that’s defined the team so far this season.

“They weren’t getting as excited as they usually do and that’s why we’re such a good team,” Mauseth said. “In those crunch situations we push hard in those points — we get so excited and we weren’t even excited tonight.

The Tigers play again at 7:15 p.m. Thursday against Mankato East (1-7, 1-3), whose only victory this season came against Austin, at Albert Lea High School.