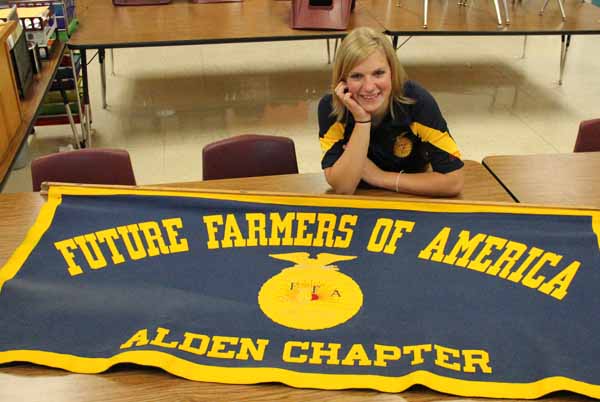 Annie Tomschin, a senior at Alden-Conger High School, recently volunteered at the Minnesota State Fair in the Miracle of Birth Center. She’s the FFA chapter president in Alden and the Region 7 historian. -- Kelli Lageson/Albert Lea Tribune

ALDEN — A local student recently had a rare opportunity to help maintain the Miracle of Birth Center at the Minnesota State Fair.

Annie Tomschin, a senior at Alden-Conger High School, has been involved with FFA since she was in seventh-grade and is the Alden chapter’s president and the historian for Region 7.

Tomschin applied and interviewed to be a barnyard attendant at the birthing center, one of the most popular exhibits at the fair. She helped out for most of the first week of the fair and stayed at a sorority at the University of Minnesota campus. Part of Tomschin’s duties were to answer questions of the public, and her specialty was sheep because her family used to raise them. Attendants also cleaned and cared for animals. 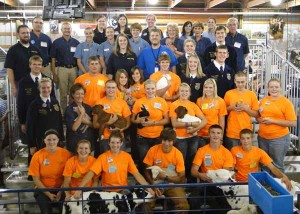 Annie Tomschin, president of the Alden-Conger FFA, worked as a barnyard attendant in the CHS Miracle of Birth Center. She’s wearing an orange shirt and holding a black rabbit, fourth from the left in the second row. -- Submitted photo

“I wouldn’t say I’m an expert, but I know a lot about them,” Tomschin said. “It was really interesting hearing the public’s questions.”

She said she was most surprised to hear that people didn’t think lambs were raised for the meat, which is a food that’s more popular in other parts of the world. Tomschin’s FFA adviser, Pam Koenen, said it was a great experience that not all students get because only 30 FFA members throughout the state are chosen to help.

“It’s the most-visited exhibit at the state fair — one in three visit the birth center,” Koenen said. “Annie was an excellent candidate.”

While she’s been involved with the Freeborn County Fair most of her life, Tomschin said it was fun to meet and hang out with other students her age in FFA while working together at the birthing center. She also enjoyed eating deep-fried Snickers and other various foods at the state fair.

After working at the birthing center, Tomschin showed six calves at the state fair. One steer got second in its class, a breeding heifer got sixth in its class and the four red angus she showed all got third in their classes. The Alden-Conger chapter of FFA was also named the premier market livestock exhibitor.

Tomschin has been to leadership camps through FFA and will soon be traveling with the state team to the three-day national convention in Indianapolis as a delegate. That’s what she’s liked most about FFA.

Tomschin lives with her parents on a farm east of Alden. She hasn’t decided where she wants to go to college next year but wants to go into nursing and is thinking about South Dakota State University or the University of Minnesota.

The Miracle of Birth Center, sponsored by Inver Grove Heights-based CHS Inc., allows fairgoers to witness live births of sheep, pigs and cows as well as experiencing life on a farm. FFA members, veterinarians and veterinary students work together to make sure animals are well cared for. The center started in 2001, and a new center was built in 2006.

CHS Inc. was formed 1998 by a merger between the cooperatives of Cenex Inc. and Harvest States.