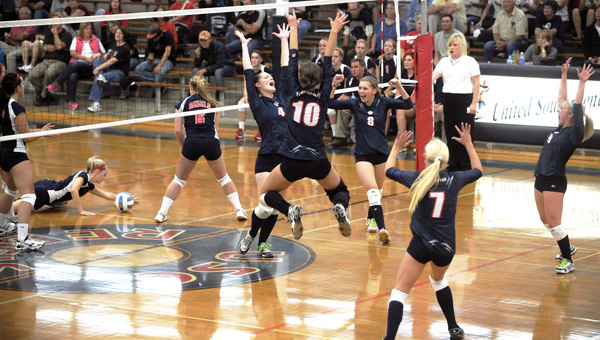 WELLS — Banged up but not broken, the Albert Lea volleyball team rallied Monday from a two-game deficit for an emotional win over United South Central.

Dealing with injuries to three starters, the Tigers struggled keeping up with an energized Rebels squad during the first two games but found a spark and dominated the final three. Albert Lea won 22-25, 19-25, 25-12, 25-14 and 15-10.

“We never give up,” Tigers coach Jaime Mauseth said. “I said ‘We either go big or go home so be as aggressive as you can and go at these girls.’

“When we lose two games and we come back we get more motivation to come back harder,” sophomore Annie Ladwig said. “We knew the spots, we know the team and it pushes us to keep getting points.” 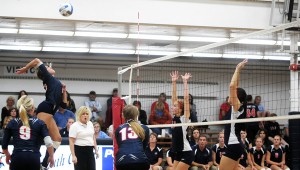 Ladwig was a big part of the Tigers’ revival.

With a narrow 10-8 lead in Game 4, Ladwig crushed three kills over four points to extend the Tigers’ lead to 13-9. Abby Pleiss added an ace block, and Ladwig and seventh-grader Julia Deyak exchanged kills to extend the lead to 22-11.

Another kill by Ladwig, who scored most of her points from the back row, gave the Tigers a 25-14 win and forced a decisive Game 5.

“They weren’t picking her up when she was playing in the back row and we kept sending her back,” Mauseth said of Ladwig. “She just pounded them straight down and that’s what we like to see out of her.”

The Tigers didn’t relent in the final game and built a 4-1 lead behind a kill and ace block by Claire Buendorf, and an ace serve by Camryn Keyeski. The Rebels’ Allie Voigt responded with a kill and two ace serves of her own to pull USC ahead for the first time since Game 2 7-6.

Another thundering kill from Ladwig pulled the game even, and Rehnelt’s kill gave the Tigers an 8-7 lead and its game-winning point. Ladwig notched her game’s fifth kill and an ace block to score the Tigers’ 13th and 14th points, respectively, and the team erupted as Voigt’s kill attempt went long, securing the come-from-behind victory.

“The one thing about these ladies is we work so well together,” Ladwig said. “We believe in each other and always have each other’s backs.”

For much of the final three games, the Tigers had one of its youngest rotations on the court. Buendorf was the only senior on the court along with three sophomores (Ladwig, Rehnelt and Bryn Woodside) and two seventh graders (Deyak and Keyeski). Deyak, who didn’t have a lot of varsity experience entering the match, finished with four kills.

“She makes some young mistakes but she’s just a really great volleyball player, so when we can set her up to volley and it’s on the net she can just pound that thing,” Mauseth said. “We’ve been looking at her and tonight she really shined and showed us what she can do.”

The starting setter, Woodside, didn’t play in the first game because of a high ankle sprain. She started the final four games, though, and finished with 25 set assists. 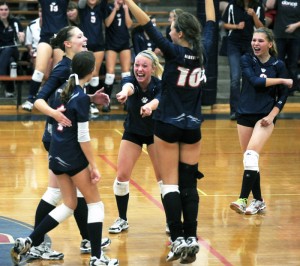 Mauseth said she was weary of playing Woodside but she provided a much-needed spark.

“It makes a big difference because of the energy she brings,” Mauseth said. “She’s such a huge leader for us. She’s so loud and gets the team pumped, and that’s what we need.”

Rehnelt was injured in the second game after she collided at the net with Buendorf. Rehnelt exited the game grabbing her left knee but returned and played a big role in the three-game rally.

Ladwig was the most obviously injured Tiger, wearing a black brace on her left leg that ran from her thigh down to her ankle. Ladwig struggled jumping in the first two games and was visibly frustrated. She recovered though to finish with a team-high 20 kills and three ace serves.

“I wasn’t hitting, I wasn’t serving, I couldn’t get the ball over the net,” Ladwig said of the first two games. “But I got my confidence back. It’s just playing volleyball.”