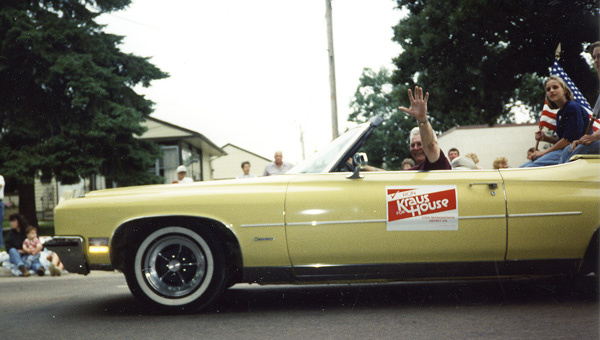 Bob Haukoos waves out of a convertible with a sign for legislator Ron Kras during a parade. -- Submitted photo

That’s how people across Albert Lea are remembering the late Bob Haukoos, a former mayor and state representative. He died Saturday at his home after battling complications of congestive heart disease.

“He’s one of the people who quietly made a difference in a lot of things,” said Dan Dorman, executive director of the Albert Lea Economic Development Agency. “He wasn’t boisterous. He quietly got things done, and I think he was respected for that.” 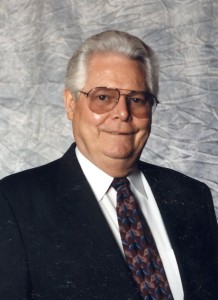 Haukoos, 80, has served in numerous public service roles throughout his life, starting with military service in the U.S. Navy during the Korean War.

He worked for the Albert Lea Fire Department for 21 1/2 years, after which he was elected to the Minnesota House of Representatives for eight terms. He also served on numerous community boards throughout the years and served a term as Albert Lea’s mayor during 2001-2002.

“He was an honorable and real honest individual,” said 6th Ward Councilor Al “Minnow” Brooks. “He just really cared about the community.”

Brooks said Haukoos liked to be out in the public asking community members their opinions of how to make Albert Lea a better place to live.

He had an “outstanding relationship” with his constituents, Dorman said, noting that people saw him as a common, hard-working man.

“He was one of us,” Dorman said. “His heart was always in the right place. He cared a lot about the city.”

When Dorman first campaigned for state representative in 1998, Haukoos was out doorknocking with him and campaigning for him. 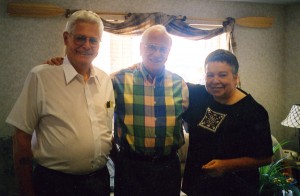 Dorman said he learned a lot from Haukoos, and it was nice for him as a freshman legislator to have someone with more experience to turn to.

Tim Penny, president of the Southern Minnesota Initiative Foundation who served as a state legislator before being elected to Congress, said he remembers when Haukoos reached out to him before running for the state Legislature.

Penny said Haukoos could bring together people from both sides of the aisle.

“He wasn’t the kind of politician that was going to throw gasoline on the flames,” he said. “He was the kind that was trying to create an opportunity to get things done.”

Penny, who is also related to Haukoos, said the former legislator took charge of the Haukoos family reunion for many years, which is held each year in August. He organized the program, organized photos and kept records.

Marie Adkins, his younger sister, said she and Haukoos had coffee together almost every day for the last year. Wherever they’d go, he’d find someone he knew.

“I think he knew everybody,” she said. “He had a very good personality.”

He was married to his wife, Grace, and together they had two children and three grandchildren.

Funeral services will be held at 2 p.m. today at First Baptist Church.