Funeral services for Bob Haukoos, 80, of Albert Lea, will be held at 2 p.m. Tuesday from the First Baptist Church, Albert Lea. The Rev. Clayton Balsley will officiate. Burial will be at Graceland Cemetery with military honors accorded by the Freeborn County Servicemen’s Organization.  To sign the guestbook go to www.bayviewfuneral.com. 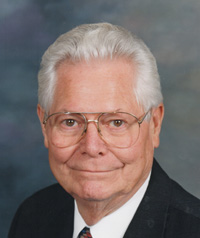 Bob Haukoos was born June 21, 1931, on a farm 1 1/2 miles northwest of Walters in Faribault County. His parents Russell and Emma Hauskins Haukoos christened him Melvin Robert but everyone called him Bob.

Bob received his formal education in the Kiester-Walters public schools and the U.S. Navy. He enlisted in the Naval Reserve and was called to active duty in 1950. During the Korean War, he served on the flight decks of the aircraft carriers USS Antietam and the USS Oriskany operating off the coast of Korea.

On July 28, 1955, Bob married Grace McNeil in Albert Lea. They became the parents of two children and grandparents of three. Bob served 21 1/2 years on the City of Albert Lea fire department, retiring as captain of the blue shift.

He was a dedicated and faithful public servant, giving his time and energy to many public causes. For 20 years he was a member of the board of the American Lung Association of Minnesota. At various times he served on the boards of Naeve Hospital, the National Guard Advisory Committee, the Chamber of Commerce Foundation, the City of Albert Lea Housing and Redevelopment Authority and numerous other organizations. He was a long time member of Golden Kiwanis, the VFW, the American Legion and the Sons of Norway.

Bob Haukoos died at his home on the morning of Sept. 10, 2011, after dealing with congestive heart disease for many years. He was preceded in death by his parents; brothers: James Doty and Kenneth Haukoos; and sisters: Ruth Ballou and Dorothy Rodriguez. He is survived by his wife; his daughter, Miriam Haukoos, of St. Paul; son and daughter-in-law, Robert and Leslie Haukoos, of Agoura, Calif.; and adored grandchildren: John Robert, Lauren Grace, and Ross Connor Haukoos. Also surviving are siblings and their spouses: Glenn and Elinor Doty and Marie Adkins of Albert Lea, Ethel Doty of Eden Prairie, and Marilyn Haukoos of Walters, and many other relatives in a large and widespread kinship.

Bob gave generously of his time and resources to many local causes. In lieu of flowers, the family suggests memorials to organizations and activities that help people in need in the community Bob loved and served.