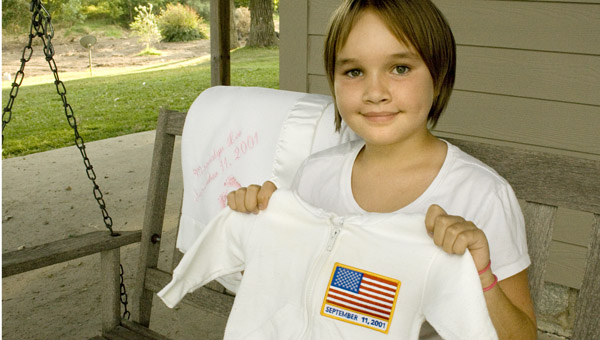 Most young girls turning 10 don’t have a care in the world.

But reality is starting to sink in for Lakeview Elementary fourth-grader Maggie Eggum.

Born on Sept. 11, 2001, Maggie and her family will celebrate a joyous occasion while the rest of America looks back 10 years later at a sorrowful, poignant and heroic day.

“I know that was the day the Twin Towers were crashed into,” Maggie said. “That was a very devastating day, and I know that.

“When the firefighters came, they went inside to save people, but they didn’t make it. Thousands and thousands of people died that day. It’s just sad.”

It’s a lot for a soon-to-be 10-year-old to absorb, especially when most of her classmates don’t know much about it yet.

The young girl’s vibrant, positive personality is a stark contrast to the terror and devastation felt throughout much of the country the day she was born.

Angie said the day Maggie was born, she and her husband, Carl, were in the hospital in Waconia.

They had stayed overnight, and Carl had gone home to Belle Plaine for a quick shower and to grab her overnight bag.

Carl was listening to a CD when driving back to the hospital, where Angie was flipping through the TV channels confused with what she saw.

A plane had just crashed into one of the Twin Towers.

On medication at the time, she said she thought: “Why is the same violent movie on every channel? I am having a baby today.”

Shortly after, Carl arrived back at the hospital and grabbed the remote from his wife, just in time for the couple to see a second plane hit the second tower.

As they watched the events unfold, their doctor came in the room. “He said, ‘No more TV. This is a special day for you,’” Angie said.

But they knew something big was happening.

Looking out the window of the hospital, they faced a gas station and could see cars lined up for blocks to get gas.

The nurses came into the room periodically and update them on the news of the attacks.

“It was surreal,” she said. “I think it was to everyone.”

Maggie was born around 2 p.m. that day.

Angie said she thinks neither she nor Carl understood the magnitude of what had happened until later, when they got out of the hospital and talked to friends and family. They felt removed temporarily from the rest of the world.

“I think the most overwhelming feeling for both of us was that it’s so amazing how God works,” Angie said, “that in such devastation that he can still show to us that he’s still there, that something good was coming out of this day.”

As Maggie celebrates her 10th birthday on Sunday, she and her mother said it will be a bittersweet day.

Though Angie said she thinks it’s important for kids Maggie’s age to have a special birthday celebration, she feels as Maggie gets older it will be harder on her to celebrate her birthday on the same day as the 9/11 anniversary.

Though there is still much Maggie doesn’t know about the day she was born, she has been asking more and more about it recently.

She still has not seen any pictures of what took place or even talked about it at school.

Angie said the family may someday plan a trip to New York so Maggie can see the aftermath of what happened that day.

In the meantime, the young girl has a few pieces of memorabilia from when she was a baby — what was saved after a tornado destroyed the family’s home in June 2010.

She has two blankets with her name and date of birth sewn onto them and a small white hooded infant sweatshirt with an American flag patch sewn on.

The mother and daughter said they don’t plan on a large party to celebrate Maggie’s birthday and will probably just have a small party with family.

On Saturday, Maggie said she and her mother are also going to a Miranda Lambert concert, and then, on Sunday, they are attending a picnic at their church.