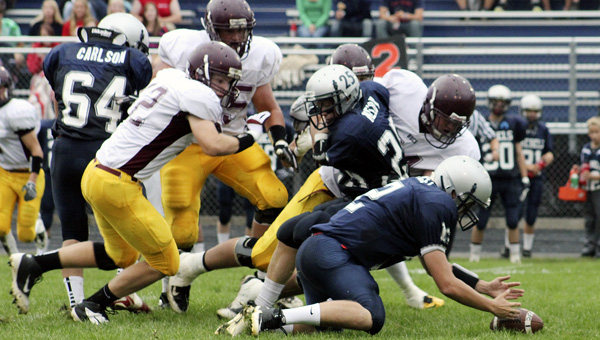 Junior quarterback Cole Stenzel falls on the ball after a botched snap from the shotgun formation. -- Garrett Wampler

WELLS — Blue Earth’s size, the humidity and the United South Central Rebels’ lack of team depth all played a role in Friday night’s 32-12 loss to the Buccaneers.

USC head coach Brad Huse didn’t have the luxury of substitutions in the contest and was forced to play 10 players both ways — on offense and on defense.

By the end of the game that rotation, the elements and a fresher opponent got the best of the Rebels (0-1).

“We had some guys going both ways in the first game and the humidity out there just took its toll,” Huse said. “We have got some guys who have never played varsity before and to go up against a caliber opponent like that — I’m proud of them.”

Early in the game, USC was able to jump out to a 6-0 lead behind three first quarter turnovers. Junior Trey Allis had the game’s first interception when he picked off Blue Earth’s Brady Anderson.

Then linebacker Blake Mutschler, who would also intercept Anderson in the opening quarter, recovered the Buccaneers’ (1-0) fumbled hand-off on their own four-yard line. This set up Cole Stenzel to find his main red zone target, Kyle Bauman, for a touchdown.

Stenzel lofted the ball in the air and let his 6-foot 7-inch receiver come down with it.

The Rebels’ defense continued to keep the visiting team out of the end zone until the end of the first half. That is when the defense broke down and allowed Carter Hanson to break free on a 20-yard touchdown run, with the extra point made by Jakob Rintelen the Buccaneers were up 7-6.

Blue Earth wasn’t finished scoring for the half with 1:08 left on the clock when Hanson delivered a 19-yard run, and Anderson found Steven Plocker on the end of a 39-yard pass to set up first-and-goal on the five yard line.

From there David Franta took the ball straight up the middle and landed in the endzone following a somersault in midair.

“We did some nice things. We are going to keep on working on the fundamentals,” Huse said. “Get the snaps down and tackle better.”

Hanson tacked on another touchdown run in the third quarter, before Blue Earth was able to break the game wide open behind Anderson’s legs.

The senior quarterback decided to keep the ball on an option play and scampered 53 yards for a touchdown late in the third quarter with only 3:30 remaining growing their lead to 26-6.

“The younger guys you could tell they were gassed,” said Chris Melby, USC’s senior running back. “We were just trying to tell them to keep their heads up.”

Melby, who also had an interception in the contest, provided a little excitement for the Rebel fans. First, the senior took the ball and ran for a 22-yard gain before being stopped. Then he took a hand-off to the left side and found a cut back hole for a 34-yard touchdown.

“They were beautiful holes and our line did a great job against them,” Melby said. “It’s just certain parts of the game that we shot ourselves in the foot.”

The glory was short-lived when the Buccaneers threw salt on the wound with a 90-yard kickoff return touchdown by Hanson, bringing the game to the final score of 32-12.

“We did well, I thought, at some things,” Huse said. “It was a great learning experience for us. That was a great team we faced.”