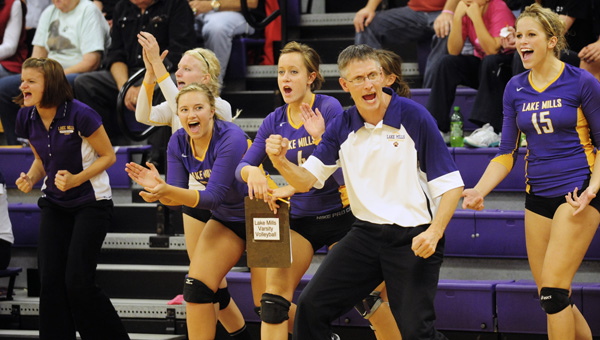 LAKE MILLS, Iowa — The Bulldogs saw one historic streak come to an end Tuesday but a more important one continue.

The Lake Mills volleyball team lost its first set of the season, ending a 64-0 start to the year, but won its ninth consecutive North Iowa Conference title with a 3-1 win over Forest City in Lake Mills. The win also extended its regular season conference winning streak to 56 matches — a run that began when the team’s seniors were in fourth grade.

“It started in the first match in 2004 and winning one at that time was a big deal,” Bulldogs coach Jim Boehmer said. “It’s hard to even think of going on that kind of a run especially when you’ve got the teams you do in our conference.” 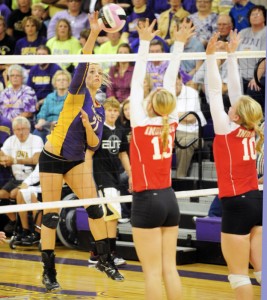 The No. 3-ranked Bulldogs (29-0) were tested in its first set against the Indians and trailed 5-4 and 9-8. Back-to-back kills by senior Shelby Kuper and junior Carlie Christianson gave the Bulldogs a 10-9 lead and the team never trailed again, winning 25-19 and extending its streak to 64 consecutive set wins to open the season.

The Indians got off to a fast start in Game 2 and strung together six straight points to build an 8-3 lead and force Boehmer to call a timeout. A tip kill by setter Morgan Fjelstad ended the run but the Indians scored 14 of the next 21 points en route to a 25-18 win.

Boehmer’s biggest concern entering the match was how his team would handle its first set loss of the season. He was pleased with what he saw.

“They responded well,” Boehmer said. “They were diligent, they were professional and we started to pick up our energy and emotion.”

The Bulldogs began Game 3 with an 8-5 lead, but four consecutive ace serves by Tabitha Blaser pulled the Indians ahead 10-8 and forced Boehmer to call his third timeout of the match.

Kuper notched two kills out of the timeout, and an ace block by Christianson gave the Bulldogs the lead as they rolled to a 25-18 win.

Christianson dominated the opening 12 points by serving the Bulldogs to a 12-0 lead behind a kill and four ace serves.

“I was back there and all I was thinking about was just hit the spot,” Christianson said. “That’s all I was doing. It was really exciting. It was such a rush.” 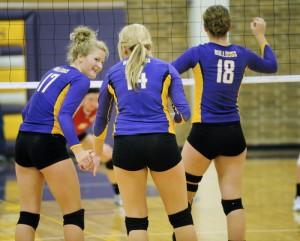 Lake Mills’ Carlie Christian, left, laughs with Shelby Kuper, center, near the net during the fourth game of a 3-1 win over Forest City in Lake Mills. -- Andrew Dyrdal

After the Indians crawled back to within 16-5, Christianson added two more kills and an ace block as the Bulldogs built a 19-5 lead and eventually won 25-7, earning the conference championship decisively.

“I’m so proud of my team and how well we’ve worked together this year,” Christianson said. “It’s amazing and an honor to be with everyone.”

“In volleyball you have to have that,” Boehmer said. “You don’t see good volleyball teams somber on the court. She allows us to raise our game a little bit and have a greater energy level.”

The Bulldogs begin the NIC Tournament pool play on Saturday with the finals on Monday. The team is looking for its eighth conference tournament championship in nine years.

The Bulldogs quest for a second consecutive state tournament berth begins Oct. 18 in the regional tournament.