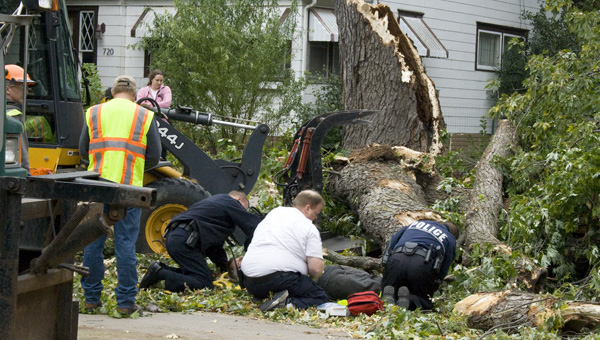 Albert Lea police officers and emergency crews from Mayo Clinic Health System in Albert Lea give aid to a city worker who was hit in the head by part of a tree while cleaning up debris from a downed tree on Fountain Street Thursday afternoon. -- Sarah Stultz/Albert Lea Tribune

An Albert Lea city worker was injured Thursday afternoon after part of a downed tree fell on him and then pinned him underneath.

The large tree, in front of a residence at the corner of Fountain Street and Court Lane, had fallen across Fountain Street during a bout of heavy wind just before 1 p.m. The worker, identified as Monte Santee, was one of two at the scene who had been called in to clear the tree out of the roadway. 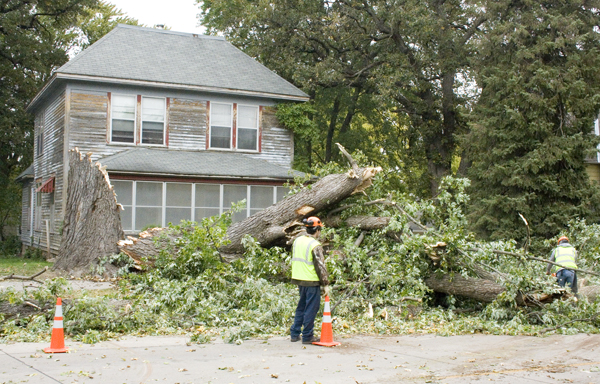 City workers were cleaning up debris from a downed tree Thursday when a worker was injured. Albert Lea police officers and emergency crews from Mayo Clinic Health System in Albert Lea responded.

Santee was cutting the tree into smaller pieces with a chainsaw at 716 W. Fountain St. at 1:35 p.m. when another part of the tree fell and hit him in the head, knocking him to the ground.

He did not lose consciousness but was advised to not move before emergency responders arrived.

He was ultimately put in a neck brace and carefully lifted onto a stretcher before being transported by ambulance to Mayo Clinic Health System in Albert Lea just a few blocks down the street.

His condition this morning is unknown.

Strong northwest winds caused that tree and others to topple Thursday. The area was under a wind advisory. The highest sustained winds on Thursday were 29 mph, with gusts reaching 40 mph.

Kelli Abrego, who lives across Fountain Street from where the incident happened, said she had just came home from work a few minutes prior to make sure nothing had blown away in the wind at her house. 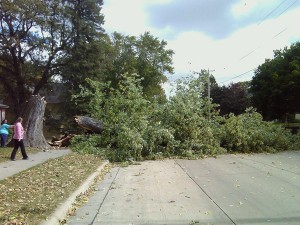 She noted that the trees that surround her home and many others on her block are old, and she sometimes worries they may fall down.

“We have this same fear that we’ll wake up one day and have a tree in our garage or back of our house,” Abrego said.

She said she came out and was watching the city workers cleaning up the tree debris when she heard the chainsaw stop and saw that one of the workers went down.

She saw Santee’s partner radio for backup, but she wasn’t sure if anyone had called 911, she said. She ultimately did so and ran over to the two men.

That’s when she saw that the worker’s legs were pinned under the tree and that his helmet had a dent in it. She noted, however, that he was able to respond to her questions, and there was no bleeding.

She said a quick prayer for the man, noting she is “a firm believer that God is there with him.” 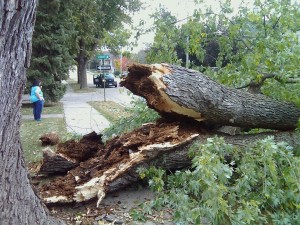 He said a man driving on Fountain Street just narrowly missed getting hit by the tree as it fell.

Winkels noted that the tree was rotted and this factor probably contributed to it being able to fall so easily in the wind.

Other tree branches were reported down across the city as the area was under a wind advisory Thursday. Power lines were down and sparking on Freeborn County Road 26. A power pole fell on Hammer Road, at a home near Bancroft Bay Park, where the Big Island Rendezvous & Festival was being set up. Power was unaffected at the park.

Around 7:30 p.m. the winds finally dropped to 14 mph and were at 9 mph at midnight. The National Weather Service forecast for today calls for sunny skies with a northwest wind of about 11 to 16 mph.

Though the overnight low is forecast as 35 degrees, frost could strike many places across southern Minnesota tonight.