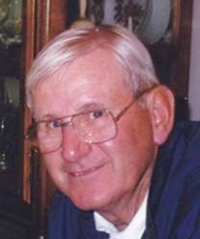 Sister-in-law, Delores Schultz, and husband, Bob; brother-in-law, Milt Tostrud; wife, Linda; and of course mother-in-law, Esther Hanson, were all special to Bumper as were several nieces and nephews and their children.

Bumper was well known for his accomplishments in golf, basketball and football. He was inducted into the Athletic Hall of Fame of Albert Lea High School on July 9, 2010. Bumper was an individual state co-champion in golf in 1950 and state champion in 1952; he also led the Tigers to a team state championship that year. He was a five-year letter winner in golf at Albert Lea High School.

Bumper worked in the golf profession for several years. He was head golf professional at Sioux Falls, S.D., and also at Rice Lake in Lake Mills, Iowa. In the fall of 1961, the Westrum moved to Rochester where Bumper worked as a gold pro with Ray Keller at Soldiers Field Golf Course. He was head pro for several years and then was hired as Golf Director of the three city golf courses in Rochester. His greatest accomplishments there were the designing and supervising the building of Northern Hills Golf Course. He also was very involved in the flood control in Rochester, especially the work and changes to Soldiers Field Golf Course.

Bumper and Dee moved to Sun City, Ariz., in the fall of 1992. He enjoyed retirement and many Minnesota friends have made it a special place. They had visits with their family and special friends who called their home the Best Westrum motel.

Bumper enjoyed giving free group golf lessons in the fall and spring for four weeks each season. He was a lifetime PGA member.

Bumper’s girls were very special to him, as were his grandchildren. His love was very evident in all his life. They will always remember the family ski trips with their special friends.

Bumper and Dee joined the Congregational Church in Sun City in 1994. The church was a special part of their lives.

A private service was held Monday, Sept. 12. A celebration of life will be held in Albert Lea in May.