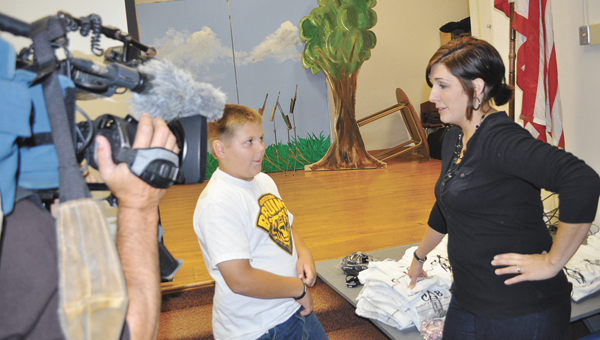 AUSTIN — A CNN news crew is following an Austin anti-bullying group and reporting on its efforts during Austin High School Homecoming. 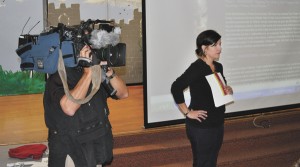 Danielle Borgerson-Nesvold listens as volunteers talk about The Scary Guy at the Community Against Bullying meeting Thursday night at Neveln Elementary School. A CNN news crew was present at the meeting and is in Austin this week to cover CAB's outreach efforts during Homecoming.

Community Against Bullying members discussed the recent backlash concerning The Scary Guy at a meeting Thursday night, offering plans and suggestions on how to get the tough-talking-but-friendly motivational speaker into the community on the right foot. Organizers said they’ve been approached by people asking who Scary is and what he’ll do for the community.

“This isn’t some guy come to scare the bejesus out of kids,” head Community Against Bullying organizer Danielle Borgerson-Nesvold said. “He’s trying to eliminate prejudice.”

Some Community Against Bullying members said they weren’t surprised by the backlash over Scary’s appearance or the fact that organizers will pay Scary $20,000 over the coming months for his 12-day tour of Austin, from Oct.31 through Nov. 11.

Borgerson-Nesvold said the cost of sending students out of a district is just as much, if not higher, as schools have to pay for a student’s education in another district should the student decide to open enroll.

“That $20,000 is a drop in the bucket compared to what one bully can do,” Borgerson-Nesvold said. “This is a huge investment to save us a lot of money and a lot of lives.”

Community Against Bullying members also unveiled their new website, www.communityagainstbullying.com, and discussed new ways to report bullying through a hotline. In addition, members are strategizing over volunteer efforts at their next couple of events, which include a teen dance on Oct. 28 at the Holiday Inn.

Gymocha will host a donation day on Tuesday where 10 percent of all sales will go toward Community Against Bullying efforts.