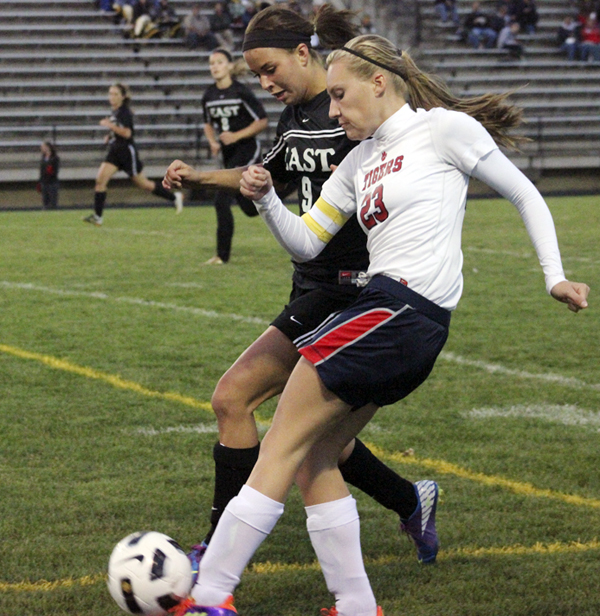 Saturday marked the beginning of a treacherous five-game schedule against the Section 2A elite for the Albert Lea girls’ soccer team.

They escaped Saturday with a 4-0 victory over New Ulm, who was a section semifinalist team last season.

Their lucked changed however on Tuesday night as they suffered a 1-0 loss at the hands of Mankato East (7-2-1, 3-1 Big Nine) the team that secured second place at the 2010 section tournament.

“I feel good about how brave we played, and we played a really good team,” Tigers coach Rick Barnhill said. “This team was in the section final last year and they have the ability to do it again.”

Albert Lea (6-3-1, 2-2) got off to a slow start, in part to the fact that they didn’t get a chance to warm up after the parent-player introductions at Hammer Field.

In the sixth minute, the Cougars got on the scoreboard. Junior Marta Anderson found her way through a scrum in front of the net and knocked the loose ball in for the tally.

“She is a proven scorer, but we did a nice job against her,” Barnhill said of Marta. “We didn’t have anyone specifically marked on her, but we just played good, collective team defense.”

Mankato East played a physical game with the Tigers, something Albert Lea hasn’t seen much of this season. The play continued on in the first half with the Tigers finally warming up and answering with a few shots on goal.

With 15 minutes to play in the first half, Megan Kortan attempted a shot for the Tigers from 18 yards out. The freshman drilled the cross toward the goal but it was pushed wide right.

Albert Lea had another great opportunity before the end of the half. This time Sarah Savelkoul found an open Katie Williamson on a two-on-one attack. Williamson’s shot sailed to the left of the net.

“I’m encouraged by our performance today,” Barnhill said. “We could have scored two or three goals today quite frankly. It didn’t happen tonight but hopefully another day it will work out our way.”

Williamson had another great chance to tie the contest with 20 seconds remaining in the stanza. This time the junior beat the defense and was one-on-one with the goal keeper. Williamson made her move but couldn’t slip the ball in as time expired.

Albert Lea will face a few more tests in their next three games. First they take on Mankato West (5-3, 1-2) on Thursday. That game is followed by a date with Fairmont (5-3, 2-1 South Central) and Big Nine conference front-runner Rochester Century (4-6, 3-0 Big Nine).