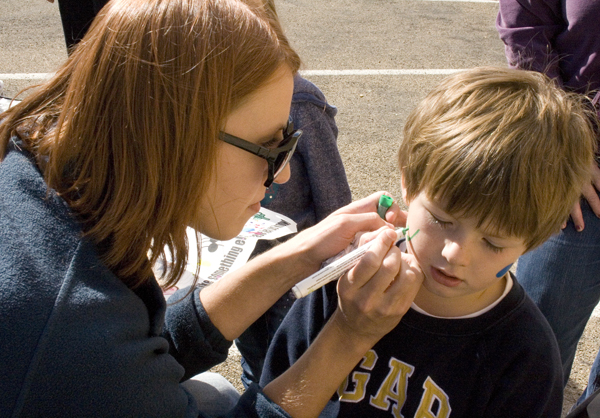 Young families, old-timers and everyone in between flocked to downtown Albert Lea Saturday for the first Fall Festival on Broadway.

“We’re happy to see stuff like this going on for families,” said Matt Schultz of Hartland, who happened upon the festival with his wife and children.

Schultz said his family is new to Freeborn County and had no idea the festival was taking place. The kids participated in some of the activities offered to children, and the whole family stopped to check out a cooking demonstration by Crescendo restaurant owner Robert Tewes.

“There were a lot of new faces out so at least they’re becoming more familiar with the downtown,” said Gloria Schreiber, an Albert Lea Farmers Market vendor.

Schreiber and the other vendors lined the sides of Broadway Avenue for the span of the festival instead of setting up at their usual location in the North Broadway Avenue parking lot.

Many sold seasonal items such as pumpkins, gourds, apples and other canned goods.

“The best thing they did was the free stuff for the kids — that brought the parents out,” Schreiber said.

Brenda Dokken, who came to the festival with her grandchildren, said she heard the festival was a lot of fun and the kids wanted to jump in the inflatable bouncy house and ride on the train.

In addition to all the free kids activities, there were also several vendors available selling food, and classic car and antique tractor enthusiasts gathered on north Broadway Avenue to display their cars and tractors.

Tami Staker, a downtown business owner who is also part of the Albert Lea Downtown Association, said she heard nothing but positive feedback about the festival. Some people even talked about having a similar festival again, as often as once a month or even once a week.

Albert Lea Convention and Visitors Bureau Executive Director Susie Petersen said she, too, was pleased with the number of people who came downtown. She and Staker talked about hopes to expand the event in the future.