Funeral Services for E. Lorraine Iverson, 88, of Albert Lea, formerly of Windom and Storden, will be at 10 a.m. Thursday at Bethany Lutheran Church in Storden with the Rev. Ann Ward officiating. Burial will follow in the Bethany Lutheran Church cemetery in Storden. Visitation will take place 5 to 8 p.m. today at the Storden Community Center in Storden and also for one hour prior to the service at the church on Thursday. Condolences can be sent online to www.lacannefuneralhome.com. Funeral arrangements are under the care of the LaCanne Family Funeral Service in Windom. 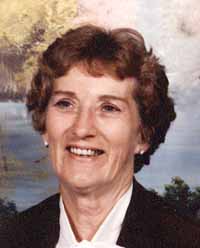 E. Lorraine Iverson passed away on Sunday, Sept. 11, 2011, at the Good Samaritan Society in Albert Lea.

Eunice Lorraine (Bruns) Iverson was born to Maud and Heiko Bruns on Aug. 7, 1923, in Porter. She attended elementary school in Porter and high school in Canby, where she graduated in 1940. She worked various jobs until she married Harvey Iverson, from Storden, on Oct. 25, 1943, in Del Ray Beach, Fla. When Harvey returned from overseas, they settled in Fairmont. Then they moved to Storden where they built their own home. Lorraine lived in Storden for 59 years before moving in to Mikkelson Manor, Windom, in April 2006. She later moved to Good Samaritan Society in Albert Lea in June 2009 where she passed away on Sunday, Sept. 11, 2011, at the age of 88.

Lorraine was very active at Bethany Lutheran Church as Sunday school teacher and superintendent, Ladies Aid, Bible school teacher and confirmation teacher. She also was a 50 plus year member of the American Legion Auxiliary Post 404, serving in various capacities, including president and vice president. She enjoyed politics and was a “vote counter” and volunteer. She loved political discussions, especially with her son-in-law.

Lorraine and Harvey enjoyed camping, fishing, gardening, dancing, and gathering with family and friends. They followed their children, grandchildren and great-grandchildren’s school and sporting activities.

She was preceded in death by her parents; husband, Harvey; two sisters: Doris Capp and Leona King; and one brother, Glen Bruns.

Lorraine will be greatly missed by all who knew her.