Essay: Reliving instead of remembering Sept. 11

NEW YORK — The planes will crash. You’ll hear police sirens, the voices of those who lived and many who didn’t. You’ll feel like you’re in the buildings. And then they’ll fall.

There’s long been talk of a room in the Sept. 11 museum that will look something like this. Planners spoke years ago of an “immersive” area where visitors will hear, see and know what Sept. 11 really felt like. 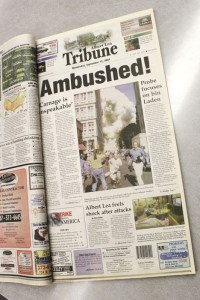 “Jules, it’s Brian. Listen, I’m on an airplane that’s been hijacked,” his voice cracks. “If things don’t go well, it’s not looking good, I just want you to know I absolutely love you.”

Or Betty Ong, a flight attendant on the second plane that was steered toward New York, talking about a stabbing in business class, a hijacking and something that had been sprayed around the cabin. “We can’t breathe,” she says.

An immersion room? Who needs one. Ten years after it happened, Sept. 11 is everywhere. It’s difficult to move around the country and not experience a sliver of it — the day — in some way. To some extent, the entire nation remains an immersion room.

Look no farther than your smartphone, where StoryCorps promises an oral history for every victim on a 9/11 memorial app. More than half a million text and pager messages sent that day are online, courtesy of Wikileaks. (“DO NOT GET ON THE PATH TRAIN…THE WORLD TRADE CENTER IS ON FIRE,” reads one. And there’s “President has been rerouted wont be returning to washington but not sure where he will go.”)

The Internet Archive just put 3,000 hours of footage online of a week of Sept. 11, 2001, coverage beginning that Tuesday morning at 8:30 a.m. You can watch the twin towers vaporize into a dust plume on 20 different U.S. and international networks, and hear television anchors struggle to make sense of that incomprehensible event as it happens.

Television brought the 2001 attacks to the world in real time, and forever linked the thousands who lived through it and the millions who watched. It became a collective experience, and, from every angle, one of the most digitally documented events ever. And so it remains.

Abraham Zapruder’s grainy film of President John F. Kennedy’s assassination is invaluable, but it’s just one, heavily analyzed angle. There are no emails from Pearl Harbor or D-Day, no text messages from the passengers of the Titanic sent as the great ship went down.

So Sept. 11 will always be different, for the generations that follow. More people will be able to see it and curate their own Sept. 11 story from a wealth of sources. We will never be too far from this past.

For those who lived through it, we can re-experience it on demand, as often as we want. And this anniversary, again, we’re doing it.

When it comes to the day, and everyone returns to the day, Sept. 11 is relived more than it is remembered. Why else is it that when the topic comes up in conversation, the first story is one’s own. Were you there? Did you know anyone who was?

In the era of 9/11, Wikileaks and a minute-to-minute news cycle, we crave information, and authentic experience. So our experience, and everyone’s experience, is of enormous value. It was a shared one. And maybe we just can’t understand it still and need to look again.

This anniversary, everyone’s looking for 9/11 stories, authentic, up close and personal stories: the survivors, the families, the transformed, the winners, the losers and the dead.

And we’re looking for how it affected everyone.

The AP posted the question on Facebook, asking people around the world to describe their most vivid memory of 9/11. The answers came within minutes, visceral, you-are-there remembrances as if it had just happened yesterday.

Jeremy Suede, now 28, lived in Santa Clara, Calif., at the time. His mother banged on his door to awake him and put him in front of the television. “I got to the TV just in time to see the second plane hit and then I watched in utter disbelief as they fell,” he writes. “I remember feeling so helpless and it was the first time in my life something major had happened.”

“The Day-9/11.” That’s the title of the memorial museum’s day-of section, which won’t open for a year. As it’s described online, it will present the events as they happened, moment by moment.

“Using artifacts, images, video, first-person testimony, and real-time audio recordings from 9/11, the exhibition will provide insight into the human drama under way within the hijacked airplanes, the twin towers, and the Pentagon.”

Families had long asked for an exhibit like this, so people would know and understand what happened. Charles Wolf, who lost his wife at the trade center, says it’s going to be rough. But “we don’t want this to be forgotten.”

The Sept. 11 museum is by no means the first to recreate or simulate cataclysmic American experiences. It’s something Americans love — under the right, and sometimes delicate, circumstances.

Civil War re-enactors gather on battlefields every year to feel what their predecessors felt in the midst of the fight, even though their weapons are filled with blanks.

Video games like “Call of Duty” simulate what it’s like to be an American soldier in the middle of modern warfare, be it Afghanistan or Iraq.

At the National Civil Rights Museum in Memphis, visitors can peer into the hotel room where Martin Luther King Jr. was assassinated. In Dallas, in the former Texas School Book Depository Building, you can stand steps from where Lee Harvey Oswald did when he aimed at the president.

Back in the 1960s, the Cedar Point amusement park had a San Francisco Earthquake Ride modeled after the 1906 disaster, where fiery buildings would look like they were falling down as visitors hurtled in a car down a dark track. At Universal Studio theme parks, tourists survive the frighteningly real (tornadoes), the once real (dinosaurs) and the fancifully fictional (the villains of “Shrek”).

At Orlando, Fla., visitors can go to “Titanic: The Experience.” They board the ill-fated ocean liner, tour staterooms, eat dinner, and touch a frosty stand-in for an iceberg. They are assigned passengers’ names and find out at the end if they’re among the 700 or so who survived or the 1,500 who drowned on that night in 1912.

How many years away are we from an interactive experience, or an “attraction,” in which people go into a reconstructed World Trade Center and try to get out. Fifty years? Twenty? Ten?

It could be called “Escape from the World Trade Center.” And everyone who goes could finally know what Sept. 11 really felt like.