Memorial services for Evelyn May (Jones) Johnson, of Albert Lea, will be held at 10 a.m. Wednesday at the Ascension Lutheran Church. The Rev. Mark Boorsma will officiate. Visitation will be held Tuesday evening from 4 to 7 p.m. at the Bonnerup Funeral Home and one hour prior to the service at the church. Interment will be in Hillcrest Cemetery. 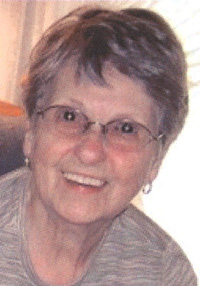 Evelyn died Sunday afternoon, Sept. 18, 2011, at her home in Albert Lea surrounded by her family.

Evelyn (Evie) was born April 10, 1928, in Avon, S.D. She was the daughter of Charles (Chas) and Hattie (Simms) Jones. She attended public school in Plainview, Neb. On June 15, 1956, she was joined in marriage to Robert (Red) J. Johnson. Evelyn managed a clothing store in St. James for several years and then was employed as a dental assistant for over 30 years, first with Dr. Steiler and then with Dr. Hoffman. After retiring as a dental assistant, she worked as a clerk at Fisher’s Fine Jewelers for 14 years.

Evelyn was an active member of the Ascension Lutheran Church and enjoyed bowling on teams in St. James and Albert Lea. In her free time, she could be found painting wood crafts, Rosemauling, reading or working crossword puzzles.

Evelyn loved her family deeply and with immeasurable joy, and she embraced her many friends with that same love.

Memorials to Crossroads Community Hospice are preferred in lieu of flowers.