The 12th biennual family reunion of the descendents of Valentine and Christiana Yost Katzung was held on Aug. 13 at the Conger Community Center. There were 33 family members in attendance. Les Anderson, of Albert Lea, led the group in singing the table prayer, after which all enjoyed a catered luncheon. Clair and Marian Katzung Dahl, Randy and Sherry Dahl Schott and Earl Cleven, all of Ellendale, helped serve the luncheon. Attendees brought bars and cookies to share for dessert. 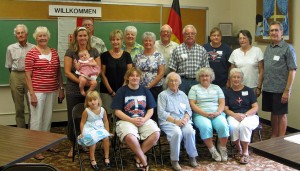 The balance of the program consisted of recognizing family members and announcing future activities. Larry passed on information he had received from those who had sent regrets to the invitations for the reunion. Brandon Peeters, of Owatonna, a great-great-great grandson of Valentine and Christiana, was recognized for his research of the Civil War. It was while working on a third grade family history project that he became aware that his soldier-relative, Valentine Katzung, served with the 1st Minnesota Volunteer Infantry Regiment from 1861 to 1864, fought at Gettysburg and was shot in the left heel. That personal connection ignited Brandon’s interest in the Civil War. Larry also informed the group that he had been contacted by Wes Sime and Steve Sprenger, both previously from the area, regarding a possible trip in 2012 to Germany to visit areas from which the family’s German roots had originated. It would be similar to the trips of the Katzung family in 1995 and 1999.

The day concluded with the Katzung cousins continuing to socialize with the relatives that they often only see every two years at the reunions. The Katzungs are planning for their next reunion to be held Aug. 10, 2013.