From worst to 1st 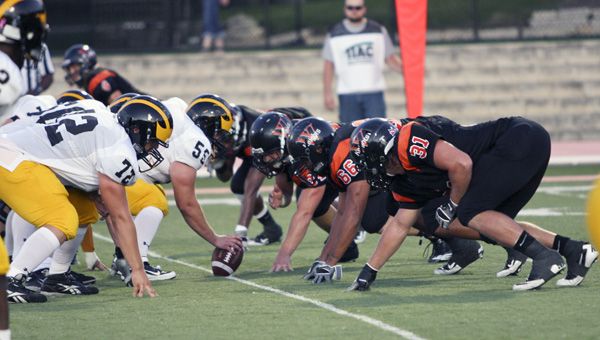 Four years ago, Logan Hansen was walking off a football field in Madelia following a 20-8 loss to the Madelia Blackhawks football team. Hansen was a senior quarterback, running back and linebacker for Glenville-Emmons, which had just lost its fourth consecutive game to start what would become a winless season. Madelia, on the other hand, was celebrating its only victory of the year.

Despite being a part of a program associated with decades of futility, Hansen was being recruited to play NCAA Division III football for Wartburg College, of Waverly, Iowa, a program with a tradition of winning. By the end of his senior year, Hansen chose Wartburg over Gustavus Adolphus and Carleton and he excelled immediately on and off the field.

Fast forward four years and Hansen, 22, is a defensive co-captain for the top 10-ranked Wartburg Knights football team. The defensive end was, as of Saturday, second on the team in sacks and had a total of eight tackles through three games. More importantly, Hansen is one of the team’s biggest leaders, which stands out more than any statistic to head coach Rick Willis.

“He’s been willing to do whatever we need him to do in the program,” the 12-year head coach said. “He certainly demonstrates leadership and unselfishness.”

After playing on Wartburg’s junior varsity team his freshman year, Hansen began seeing time on varsity his sophomore season as an inside linebacker. 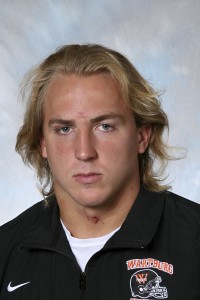 During his junior season, Hansen was moved to the defensive line, where he plays now, and the Knights have gone 19-5 over those three years with an Iowa Conference championship.

Hansen’s transition from high school to college football wasn’t an easy one especially coming from a Class Nine-Man football program. Hansen said there was a “shock value” at Wartburg because of the pace of play and advanced terminology.

“I wasn’t used to any of the defensive schemes because there were two extra guys on the field,” he said.

Hansen said the biggest challenge his first year was learning the terms and getting the game to slow down enough where he felt comfortable on the field.

“When you get the play call you need to know what to do rather than think about it and survey everything because that slows you down,” Hansen said.

When recruiting Hansen, Willis said his high school team’s lack of success was irrelevant, and that he was looking for a player who was serious about school and had a passion for playing football.

“Logan certainly demonstrates both of those,” Willis said. “Recruiting is a two-way street. His interest in Wartburg was important in the process as well.”

Hansen, who is majoring in mechanical engineering, said as a freshman he was intimidated after coming from a small-town football program but he soon found out he was in the same boat as a lot of players.

“There are a handful of guys from the same type of school that I came from,” Hansen said, noting the Knights’ MVP last season played eight-man football in Iowa. “During the very first camp, being able to compete just against other freshman helped me gain confidence in my own abilities. It didn’t matter what we did in high school. We had to prove ourselves over again.”

Despite an 0-9 football season his senior year at Glenvill-Emmons, Hansen wasn’t totally unfamiliar with winning before college. He was also a standout wrestler for Albert Lea and finished fourth individually at state during his senior year and helped the Tigers to the state finals.

Hansen said his experience in the Albert Lea wrestling program got him used to a “winning atmosphere.”

“When we wrestled for Albert Lea, every year we were going to win a conference championship and anything less was unacceptable,” Hansen said. “It’s the same mindset at Wartburg.”

Hansen’s wrestling background also aided in his move to the defensive line. Hansen said he knows how to use leverage and his hands to get off blocks and move his hips to get through gaps.

“At first I wasn’t sure about it but I trusted my coaches’ judgment,” Hansen said. “I miss getting out in coverage and getting a running start at the quarterback.”

Hansen said the Knights’ team goal is, as always, to win the Iowa Conference. He said the seniors’ team goal is to advance further in the NCAA Tournament than last year when the Knights were knocked off in the first round by Bethel College.

Willis said off the field, Hansen is one of the top students in his football program.

“He’s an outstanding student who’s diligent about academics and is who you’d qualify as a model student-athlete,” Willis said.

Hansen was recognized for his tenacity off the field when he was nominated in July for the 2011 Allstate AFCA Good Works Team, which is known as the most prestigious off-the-field honor in college football.

A news release said Hansen mentors children weekly at Bremwood Lutheran School, an at-risk institution, in Waverly, and volunteers for the Special Olympics Iowa Unified Sports Day committee. Hansen was one of 132 nominees in all of NCAA college football.

“He’s a guy we’re proud to have here at Wartburg,” Willis said.

Hansen is the son of Michael and Doreene. He has a brother, Alex, and sister, Heidi Gaston.