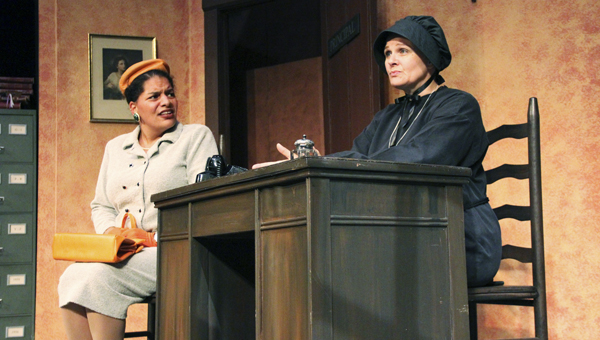 A small cast has been busy preparing for a gripping drama that will leave the audience to make their own conclusion. 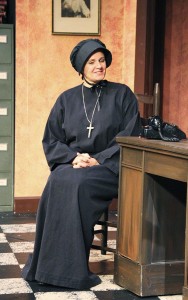 Gordy Handeland directs “Doubt,” the newest production from Albert Lea Community Theatre. ACT is in its 47th season, and the show opens at 7:30 p.m. today at the Marion Ross Performing Arts Center. Lisa Sturtz plays one of the lead roles as Sister Aloysius Beauvier, the principal of the play’s school, and she said she enjoys that the audience and characters have to come to their own decision about what actually happens in the play. It’s set in the 1960s.

The drama, written by John Patrick Shanley, tells the story of suspicion about a priest’s behavior, who may or may not have been inappropriate with a male student. Al Blumenshein plays Father Brendan Flynn, Andie Nordstrom plays Mrs. Muller, the student’s mother, and Kristi White plays Sister James.

Sturtz’s character asks White’s character to keep an eye on the priest, and based on the reports Sister Aloysius makes an accusation.

“Who believes what is all up to the character and audience member,” Sturtz said.

Nordstrom said playing the part of the mother of the student who may have been abused was difficult because in the play the mother tries to look past the abuse so her son can have a better education at the school. 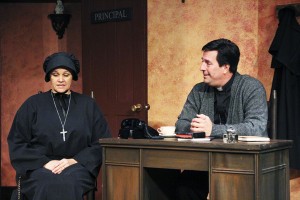 The set was designed by Handeland and created by Bill Schmitt and John Fure. Handeland said he wanted a more intimate set, which is why it is built fairly close to the audience seating. The show runs about 90 minutes and has no intermission. Though there is no adult language, Handeland said the content is best for pre-teens and older.

Handeland said he enjoys that the play brings up the subject of gossip and how it can wreck people’s lives or careers. One of his favorite parts is the showdown between Sister Aloysius and Father Flynn.

“It makes people want to discuss it,” Handeland said.