Remembering and praying for healing 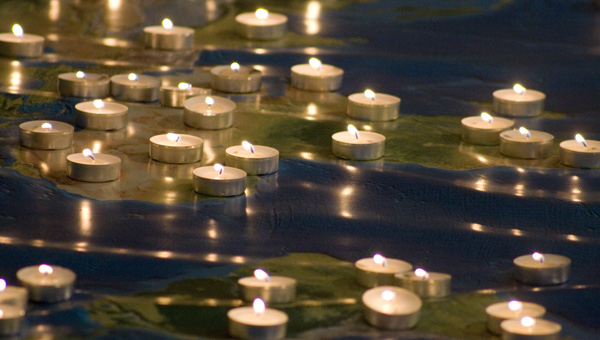 Candles lit to symbolize healing for the nations of the world sit on a map Sunday at the 9/11 memorial and prayer service at Grace Lutheran Church. -- Sarah Stultz/Albert Lea Tribune

With lingering fears and sorrows from the 9/11 terrorist attacks, about 250 Albert Lea area residents on Sunday prayed for consolation and healing — not only for themselves but for America and other countries throughout the world. 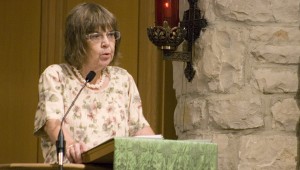 On what was the 10th anniversary of the attacks, the residents gathered at Grace Lutheran Church to participate in a community service of remembrance and prayer.

People from at least eight churches in the area were present.

“God knows that there has been great grief and loss in our nation,” said the Rev. Daphne Hamborg of Bear Lake Concordia Lutheran Church and St. Paul Lutheran Church in Conger.

She said though she recognized there were people — including herself — who were still struggling with one aspect or another of what happened, she encouraged people to turn to God and remember what Jesus Christ taught — to love God and all of humankind.

“We are to love outsiders like the Samaritan,” Hamborg said, noting this includes even the people who seem unfaithful or untrustworthy. 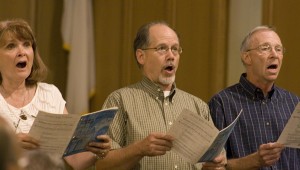 Members of a community choir sing "First Song of Isaiah" Sunday at a service of remembrance and prayer on what was the 10th anniversary of the 9/11 attacks. -- Sarah Stultz/Albert Lea Tribune

And it also involves forgiving others.

Hamborg’s homily was just one aspect of the community service, which also included several hymns, scripture readings, litanies an even candle lightings.

A community choir, made up of at least 40 people from various faiths, performed the anthem “First Song of Isaiah.”

At the close of the service, the congregation had the opportunity to light candles and place them on a world map to symbolize prayers for the different nations of the world.

Various religious leaders led the service, which taught of remembrance, repentance and hope.

“We gather to pray for the healing of the nations, knowing that the events of Sept. 11 were but one sign of the violence and division that exists in our world,” said the Rev. Andrea Meyer of Grace Lutheran Church.

The service was one of a handful of special events planned in the area for the 10th anniversary of the 9/11 attacks.

Also taking place on Saturday was a 9/11 tribute at the Albert Lea Moose Lodge.

At noon Sunday, sirens and church bells rang to remind residents to take a moment of silence to remember the attacks on the World Trade Center, the Pentagon and in Pennsylvania.