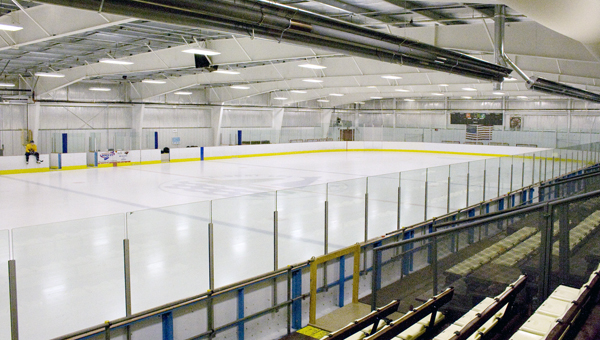 The second ice rink at Albert Lea’s City Arena is slated to be closed in 2012 during the summer as a maintenance and cost-saving measure. -- Sarah Stultz/Albert Lea Tribune

Local hockey enthusiasts are sharing mixed reactions to news that the city may close the second sheet of ice at City Arena next summer as a maintenance and cost-saving measure.

Discussion about the issue has emerged during budget discussions by city leaders and Parks and Recreation Department staff, who are in the middle of planning 2012 budgets. 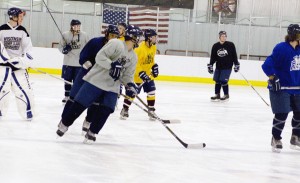 Kevin Dulitz, past president of the Albert Lea Hockey Association, said while association officials think it is unfortunate to not have ice during the summer — that would allow for hockey summer camps and for youth to accumulate additional hours on their skates — they also understand that there is maintenance that needs to be done on the ice.

“The city needs to make sure the ice is functioning properly and the facilities are up-to-date,” Dulitz said. “We just hope that the maintenance they need to do can be done in a short period of time and get the ice up as soon as possible.”

He said as far as maintenance goes, he would rather city staff conduct maintenance upgrades in the summer, rather than wait until something goes wrong and have the potential of having only one sheet of ice during the hockey season.

“I’d rather have them do the maintenance and make sure we have long-term ice,” he added. 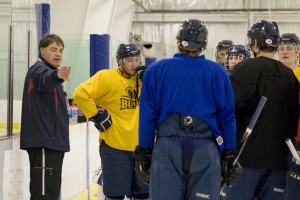 North Iowa Bulls coach Todd Sanden talks with his players Tuesday during a practice in Albert Lea. The team had been using the Albert Lea ice while their ice was still in the works. -- Sarah Stultz/Albert Lea Tribune

However, if the decision is more of a financial one, he said the hockey association and the local Convention and Visitors Bureau staff would like to have further talks with the city to find out what the financial need is.

Parks and Recreation Director Jay Hutchison said this sheet of ice has been in place for eight or nine years without being taken out. He said part of the decision is for maintenance purposes, to allow staff to check on the floor underneath.

But part of the decision is also for cost savings.

“In this time of budgets where we have to cut, that’s one of the things we’re looking at,” Hutchison said.

He estimated it would save the city at least $30,000. It will also give the city a baseline estimate for what the utility costs are for each rink.

He anticipated the ice would be taken out in the end of February or first part of March and would be put back in by mid-August.

“I know it’s going to be hard on some groups and some people,” Hutchison said. “We appreciate people at least working with us this year. What happens in years to come is still to be determined.”

He noted that the ice should come out every two to three years.

However, some say it will be a setback to young players wanting to develop their skills without driving a long way.

“I’m very disappointed because realistically this is the only ice our players get during the off-season,” said Albert Lea boys’ hockey coach Roy Nystrom. “Many of the hockey summer camps far away cost a lot of money.”

Nystrom is also an organizer of one of at least three summer hockey camps that take place on the second sheet of ice.

If Albert Lea was unable to have its summer camps, youth would have to travel to the next closest rinks in Winona or Rochester.

“It’s going to put a damper in our program, there’s no doubt about it,” Nystrom said.

He noted ever since the second sheet of ice has been in place there have been summer camps in town.

Mark Stadheim, who is involved with the Blue Line Club — the boys’ hockey booster club — said the club and the hockey association will try to find some other people for rentals at the arena and will take a harder look at making sure the sheet of ice does not get closed.

“We’re going to see what we can do to try and come to a better solution than eliminating that second sheet,” Stadheim said.