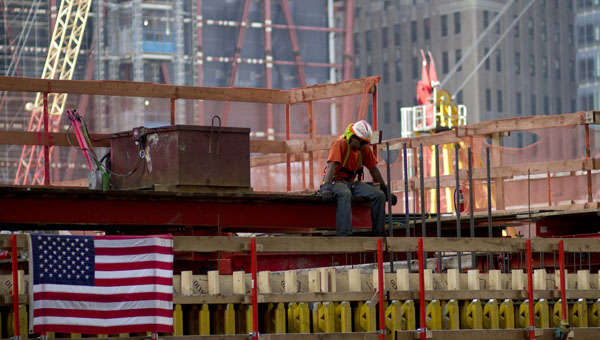 Construction continues at ground zero in New York, Thursday, Sept. 8. The National September 11 Memorial will be dedicated on the 10th anniversary of the attacks, Sept. 11, 2011, and will be open to the public the following day. -- Oded Bality/AP

WASHINGTON — A decade later, what happened on Sept. 11 still resonates for much of the country. Even more Americans now say the horror of that day changed their lives.

A new poll by The Associated Press-NORC Center for Public Affairs Research in Chicago finds that more Americans today say Sept. 11 had an impact on their lives than said so five years ago — 57 percent compared with 50 percent in 2006.

As the nation prepares to mark the 10th anniversary of that haunting day, the chilling events that unfolded in New York, Washington and Shanksville, Pa., still evoke a stir of emotions for everyday Americans — from anger and shock at so many innocent lives lost to patriotism and pride in the heroes who emerged on hijacked planes and in the rubble of fallen skyscrapers and a shattered Pentagon.

Ten years later, we are a nation changed — moving on, but still changed.

Lisa Schmidt, 48, of Vancouver, Wash., thinks about Sept. 11 “just about every day” and almost every time she sees a plane.

“The intensity of thinking about it, and confronting the thought of it, still is very uncomfortable and I didn’t know anyone who was killed or injured,” said Schmidt, owner of a marketing company. “It was a defining moment for how Americans define tragedy.”

For some people, like Susan Garrison of Carthage, Tenn., her fear of more attacks keeps her away from airports.

“I will not fly,” said the 54-year-old Garrison, even with stepped-up security. She said she hasn’t set foot inside a plane since Sept. 11. “These people are the types of people who would get jobs in airports. If they want to kill people, they’re going to do it.”

Almost one-third, 32 percent, of those polled said they are concerned about becoming a victim of terrorism or having a family member harmed in an attack. That’s down slightly, though, from 38 percent in 2004.

The poll also found Americans are less angry about having to fight a war on terrorism than they were a few months after the attacks — 57 percent say so now compared with 67 percent then — and worries about how the war on terrorism might affect daily life have faded since the days after Sept 11.

In the AP-NORC poll, broad majorities said Sept. 11 changed everything from the policy and spending decisions of our country’s leaders — 94 percent and 90 percent, respectively — to the unity of the American people. Eighty-eight percent said it brought us together.

Soon after the attacks, the U.S. government was transformed with the creation of the Homeland Security Department, the Transportation Security Administration, the National Counterterrorism Center and a slew of other centers and government committees dedicated to keeping the country safe.

Sept. 11 also changed the way we talk to our children.

Conversations about “stranger danger” or “stop, drop and roll” have now been expanded to include delicate discussions about “people who don’t like us” and why we have to take our shoes off in those sometimes too-long airport security lines.

Fifty-five percent of the people polled who have children 10 and under said they have talked with their sons and daughters about what happened on Sept. 11. For the other 45 percent, the subject had not come up.

Rhonda Weaver, a 42-year-old attorney from Brandywine, Md., said she first talked about it with her 11-year-old daughter a few years ago. The child had come home from school asking about the attacks and why people would do that.

“We just told her that there are some people who don’t like the way we live,” said Weaver. “They see us as an enemy and they did that as a way to kind of get back at us and make us feel weak.”

Weaver said she has not yet talked about the attacks with her 8-year-old son.

Ken Kreitner, 64, of St. Louis, was among the 89 percent in the poll who thought the attacks had an impact on the economy.

“We had to restructure just about everything we do in this country today,” said Kreitner. “It’s cost us billions and billions of dollars to set up safeguards for travel in this country. That alone had a major impact on our economy.”

For Kreitner, a Vietnam veteran, Sept. 11 was a day that changed the country.

“It’s the first time in the history of our country that an act of terrorism of this magnitude ever took place. People finally got mad and they wanted something done about it,” he said. “Anyone with any sense at all realized our country would never be the same again and that we were not only going to pay with lives the way we did, but we were going to be paying for it probably for the rest of our lives.”

The cost of the wars in Afghanistan and Iraq stand at a staggering $1 trillion, according to the Pentagon. That figure includes domestic defenses such as surveillance of U.S. airspace.

The AP-NORC poll was conducted from July 28-Aug. 15 by NORC at the University of Chicago. It involved landline and cellphone interviews with 1,087 adults. The margin of sampling error is plus or minus 4.1 percentage points.