In Albert Lea, attacks were ‘hard to accept’ 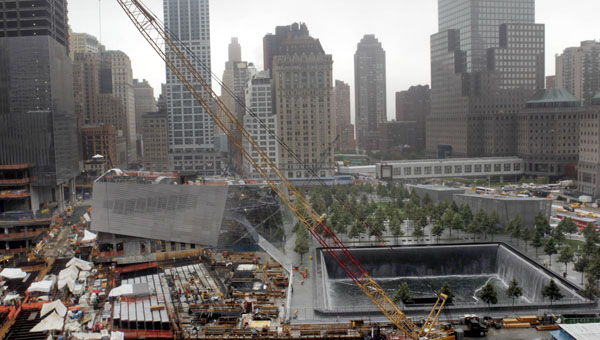 Construction continues at ground zero in New York on Thursday. The National September 11 Memorial will be dedicated on the 10th anniversary of the attacks, today, and will be open to the public the following day. -- Seth Wenig/AP

About 1,200 miles away in Albert Lea on this day 10 years ago residents were stopping what they were doing and trying to understand what was happening to the World Trade Center towers in New York.

One such resident was Jack Dooley. He and his wife, Karen Meyerson, are both originally from New York and had moved to Albert Lea in 2000.

Dooley was amazed to see what had transpired. Years earlier he had worked as an electrician on the towers while in college. A month after the attacks, Dooley visited New York.

“It looked like a wreck,” Dooley said. “It was basically a war zone.”

Meyerson, who grew up in Brooklyn, said she remembers the towers being an integral part of the New York skyline.

“There’s nothing like the New York skyline in the world,” Meyerson said. “Now it doesn’t look like it at all.”

On special occasions the couple would dine at a restaurant at the Cellar in the Sky restaurant atop the north tower.

“It was the most beautiful, romantic restaurant,” Meyerson said. 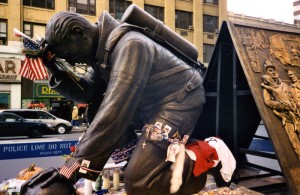 The two still frequently talk about that day 10 years ago, and Meyerson said it’s sometimes still hard to believe. She wasn’t able to bring herself to fly for more than a year after the attacks, though she and Dooley have always been frequent flyers. Dooley, who flew back to New York not long after the attacks, said the security at the airport had changed dramatically.

Both said they think Americans had a sense of security and thought something like the attacks would never happen.

“They had an attitude that this just doesn’t happen in America,” Dooley said.

Out in Wyoming, Judi Kluever, who now lives in Albert Lea, was driving to work when something incredible happened. She happened to notice an older woman on the sidewalk gesturing that she needed help.

Kluever took the woman to the hospital and went on her way to work. When she got to work, the next office over was the Wyoming Emergency Management office, where the employees were glued to the TV watching the destruction.

“It was just an overwhelming feeling of unbelief,” Kluever said.

She said it was difficult to see footage and photos of what was happening in New York and Pennsylvania, but she was able to be a little positive about the day because she had helped that woman who was a complete stranger and knew that similar acts must have happened throughout the country as well.

“There was so much negative happening, but there was that little glimmer that there’s still something good in the world,” Kluever said.

Rhoda Knudson was another Albert Lea resident who felt quite separated from the attacks in New York. Knudson and her husband were visiting Hawk Ridge Nature Preserve in Duluth. She said her daughter called her to describe what was happening and it had a jarring effect.

“Just the contrast of what she was describing to where we were in this beautiful, magnificent place of nature,” Knudson said. “It was quite humbling.”

Shock was the most pertinent feeling for Albert Lea resident Tom Wentzler when he learned of the attacks. He happened to be eating at the Elbow Room and watching television, when the news came on.

“It was hard to accept,” Wentzler said.

He later came to the Tribune office to pay a bill and said just like everywhere else he went that day everyone was talking about what happened.

“It was definitely the issue of the day,” Wentzler said.

Wentzler, who grew up on the East Coast, later found out his cousin, Nancy Wentzler, was supposed to have a meeting in one of the towers that day but had overslept and didn’t make it. Another cousin on the other side of his family lived about 20 miles from where the plane crashed in Pennsylvania and said he could see the smoke.

He also found out at a class reunion that he was classmates at Lea College with a man who was a firefighter in New York in 2001, who survived and talked about his experiences at the reunion. Wentzler finds it interesting he has connections to the event, one that he remembers much like his memory of the day President John F. Kennedy was shot.

“What are the odds?” Wentzler wondered.

Albert Lean Deb Olson remembers the day vividly, as she had been in Boston just 13 days before 9/11 visiting her son, Brian. Olson, afraid of her return flight home crashing, remembered her son trying to calm her by saying she should be more worried about terrorists than the plane malfunctioning.

Two years after 9/11, Olson visited New York City and vividly remembers her visit to Ground Zero. She said she stood at the site silently thinking about what had happened.

“I didn’t say too much and was deeply saddened remembering that horrible day,” Olson said.

Though Albert Leans were far away from the attacks, many remember the day clearly because of the effects it had on friends and relatives and the nation as a whole. Today marks the 10-year anniversary, and no one is anywhere close to forgetting the events that transpired on 9/11.